A husband-and-wife team of astronomers at The University of Toledo joined forces for the first time in their scientific careers during the pandemic to develop a new method to look back in time and change the way we understand the history of galaxies. 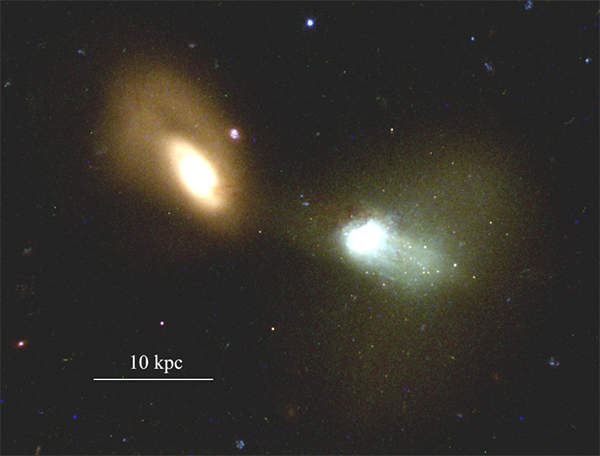 S12, a post-starburst galaxy located nearly 500 million light-years away, is on the right. It looks like a jellyfish with a host of stars streaming out of the galaxy on one side.

Working along with UToledo alumnus Dr. Adam Smercina, who graduated with a bachelor’s degree in physics in 2015 and is a postdoctoral researcher at the University of Washington, they used NASA’s Hubble Space Telescope to focus on a post-starburst galaxy called S12 that’s nearly 500 million light-years away and looks like a jellyfish with a host of stars streaming out of the galaxy on one side.

Beginning in 2012, Smercina, the “glue” that brought Smith and Chandar together on this research, worked with Smith as an undergraduate student on the dust and gas in post-starburst galaxies.

While spiral galaxies like our Milky Way have continued to form stars at a steady rate, post-starburst galaxies experienced an intense burst of star formation sometime in the last half-billion years, shutting down their star formation.

The resulting breakthrough research published in the Astrophysical Journal outlines their new method to establish the star-formation history of a post-starburst galaxy using its cluster population. The approach uses the age and mass estimates of stellar clusters to determine the strength and speed of the starburst that stopped more stars from forming in the galaxy.

Using this method, the astronomers discovered that S12 experienced two periods of starburst before it stopped forming stars, not one.

“Post-starbursts represent a phase of galaxy evolution that is pretty rare today,” Smith said. “We think that nearly half of all galaxies went through this phase at some point in their lives. So far, their star-forming histories have been determined almost exclusively from detailed modeling of their composite starlight.”

Smith has studied post-starburst galaxies for more than a decade, and Chandar works on the stellar clusters in galaxies that are typically about three or four times closer than those in Smith’s data. 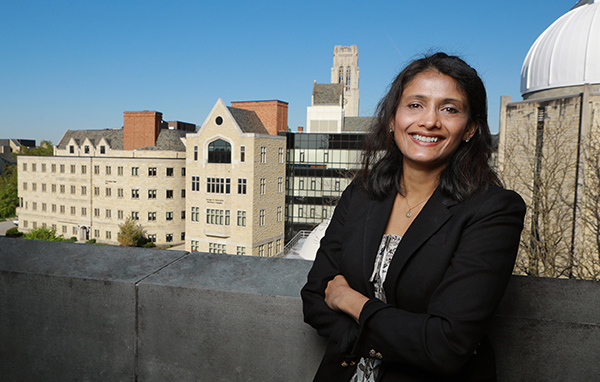 “Clusters are like fossils — they can be age-dated and give us clues to the past history of galaxies,” Chandar said. “Clusters can only be detected in these galaxies with the clear-eyed view of the Hubble Space Telescope. No clusters can be detected in even the highest-quality images taken with telescopes on the ground.”

Smith has led several large multiwavelength projects to better understand the evolutionary history of post-starburst galaxies. He discovered, for example, that the raw fuel for star formation — gas and dust — is still present in surprising quantities in some of these systems including S12, even though no stars are being formed.

“While studying the light from these galaxies at multiple wavelengths has helped establish the time that the burst happened, we hadn’t been able to determine how strong and how long the burst that shut off star formation actually was,” Smith said. “And that’s important to know to better understand how these galaxies evolve.”

The astronomers used well-studied cluster masses and star formation rates in eight nearby galaxies to develop the new method, which could be applied to determine the recent star formation histories for many post-starburst systems. 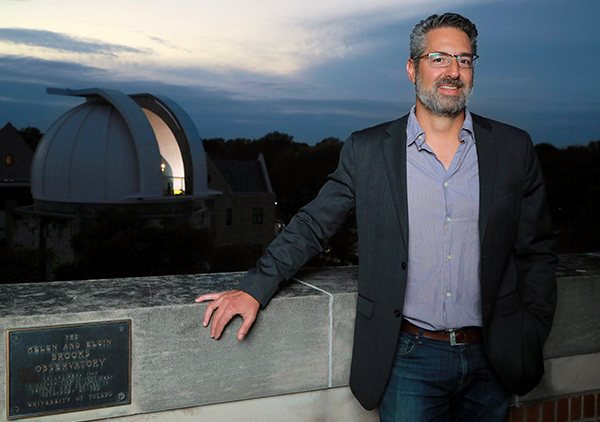 The researchers applied their different approach to S-12, which is short for SDSS 623-52051-207, since it was discovered and cataloged in the Sloan Digitized Sky Survey (SDSS).

“It must have had one of the highest rates of star formation of any galaxy we have ever studied,” Chandar said. “S12 is the most distant galaxy I’ve ever worked on.”

The study indicates star formation in S12 shut off 70 million years ago after a short but intense burst formed some of the most massive clusters known, with masses several times higher than similar-age counterparts forming in actively merging galaxies. The method also revealed an earlier burst of star formation that the previous method of composite starlight modeling could not detect.

“These results suggest that S12’s unusual history may be even more complicated than expected, with multiple major events compounding to fully shut off star formation,” Smith said.

The research was funded by the National Science Foundation and NASA.

Chandar and Smith are two of four UToledo astronomers leading some of the first research projects on NASA’s new James Webb Space Telescope scheduled to launch in December.