The target distance during the competition was 21.05 meters, and their chem-e car, named Zinc-asaurus Rex because it’s propelled forward by a homemade zinc nickel oxyhydroxide alkaline battery, stopped just 10 centimeters from the target distance to seize the victory in the international chem-e car competition. 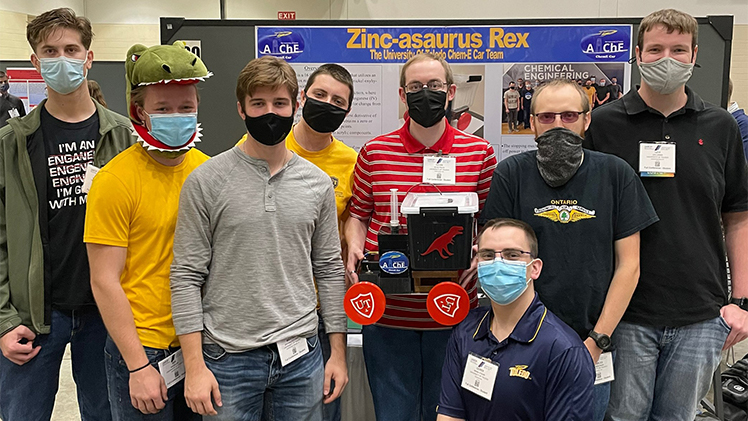 The team also received the safety award for having the chem-e car with the most inherently safe design and best application of the principles of chemical process safety.

“And it was the culmination of hundreds of hours of preparation in the laboratory, technical expertise fostered during co-op rotations and extensive knowledge obtained from my chemical engineering faculty and courses.”

While the zinc and nickel oxyhydroxide alkaline battery is the propulsion mechanism for Zinc-asaurus Rex, the chem-e car utilizes a chemical chameleon reaction — an oxidation reduction reaction between sucrose and potassium permanganate — as its stopping mechanism. 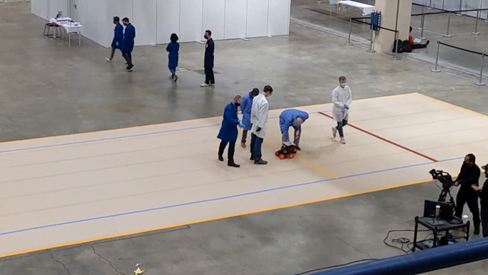 Nicholas Trumbull waits to pick up the car after it stopped 10 centimeters from the 21.05 meters finish line on the second run.

During the competition, all teams were given two opportunities to stop their car as close to the target distance as possible, and their final score was based on the closest run of the two.

“Our team’s success would not have been possible without the resources and experiences available to students enrolled in The University of Toledo College of Engineering.”