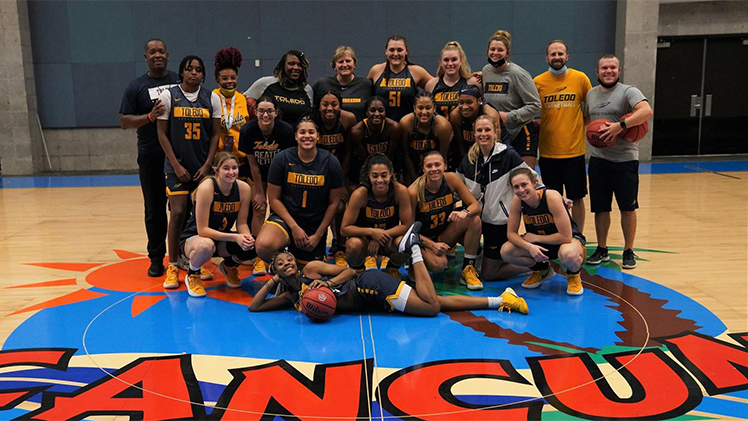 UToledo women’s basketball team arrived in Mexico for the 2021 Cancun Challenge on Tuesday and will play two games at the Hard Rock Hotel Riviera Maya this week.

The University of Toledo women’s basketball team arrived in Mexico for the 2021 Cancun Challenge on Tuesday. The Rockets (2-1) will play two games at the Hard Rock Hotel Riviera Maya, facing Idaho State (1-3) and Seton Hall (2-1) later this week.

Thursday’s game against Idaho State is set to begin at 6:30 p.m. and Friday’s contest against Seton Hall will start at 4 p.m. Both games will be streamed live on FloHoops.

This will be the second time Toledo has played in the Cancun Challenge, with the last trip coming in 2016. The Rockets faced Davidson and No. 9 UCLA that season, defeating the Wildcats by a score of 76-41 before falling to the nationally ranked Bruins by just two points, 75-73.

Toledo is coming off its first loss of the season, a 69-60 defeat at the hands of the Dayton Flyers last Wednesday. Dayton scored the first 10 points of the game and didn’t look back, leading wire to-wire. The Flyers would lead 20-8 at the end of the first quarter, putting the Rockets in an early hole they would not overcome. Quinesha Lockett tallied a team-high 22 points, her sixth straight 20-point game dating back to last season, and added a team-best four assists.

Idaho State’s lone win came against Park University on Nov. 13, with the Bengals winning 109-56 on their home court. They have also faced No. 10 Oregon, Gonzaga and Missouri. Junior Tomekia Whitman is averaging 8.5 PPG and a team-high 6.0 RPG.

Seton Hall has posted wins against Mount St. Mary’s and Lehigh, and its lone loss came against Fordham. Senior Andra Espinoza-Hunter is averaging 21.0 PPG and has been named to the BIG EAST Weekly Honor Roll twice this season.