When senior tight end Drew Rosi put on his Toledo jersey as a freshman in 2017, he wasn’t the first in his family to do so. Nor would he be the last.

Rosi’s father, Steve Rosi, played tight end for the Rockets from 1992-95, earning first-team All-MAC and honorable mention All-America honors as a senior in 1995. So when he had his first position meeting with the other tight ends his freshman year, some of Rosi’s teammates began to connect the dots.

“It took about a day or two,” Rosi said. “There’s a big picture of my dad with his name, it didn’t take long for them to put it together.”

Now in his fourth season, Rosi has also left his mark on the Rocket football program. He played in 10 games as a true freshman in 2017, helping Toledo win a MAC Championship. He set career highs last year with 18 catches for 238 yards and a pair of touchdowns, including the game-winning reception in an overtime win against Eastern Michigan.

Rosi has been an exemplary student as well. He is a two-time Academic All-MAC honoree who graduated with a bachelor’s degree in finance from the College of Business and Innovation.

“Drew comes from a great family and he’s a guy that understands the importance of handling responsibilities at a high level,” head coach Jason Candle said. “He’s been that way since the minute he stepped on campus. Drew is a guy that doesn’t back away from challenges. He meets them head-on.”

“As a parent, it feels great to know that one of your children has put forth that much effort and dedication towards something,” said Steve Rosi, who played on the last undefeated Rocket team in 1995. “It’s a difficult thing to play Division I sports and graduate college while doing as well as Drew has academically. It makes me smile to know what he has been able to accomplish.”

Drew Rosi is the oldest of the three children in the Rosi family, all of whom are student-athletes. His younger brother Nick maintained the family legacy and followed him to UToledo, earning Freshman All-America honors as an offensive lineman last season. Younger sister Raegan is a freshman on the Wheeling University volleyball team. Living in the Columbus suburb of Powell, most of the conversations around sports revolved around the Ohio State Buckeyes. But not for the Rosi family.

“Growing up in the Columbus area it was always about Ohio State or Michigan,” Rosi said. “But I didn’t really care about either because I was a Rocket fan.”

A standout player at Olentangy Liberty High School, Rosi had opportunities to play college football, but in the end, the decision was a no-brainer.

“I had other offers,” he said. “But the only school that I think really appreciated me and wanted me was Toledo.”

Rosi had grown up hearing about Toledo football and rooting for the Midnight Blue and Gold; now he would be joining them on the gridiron. 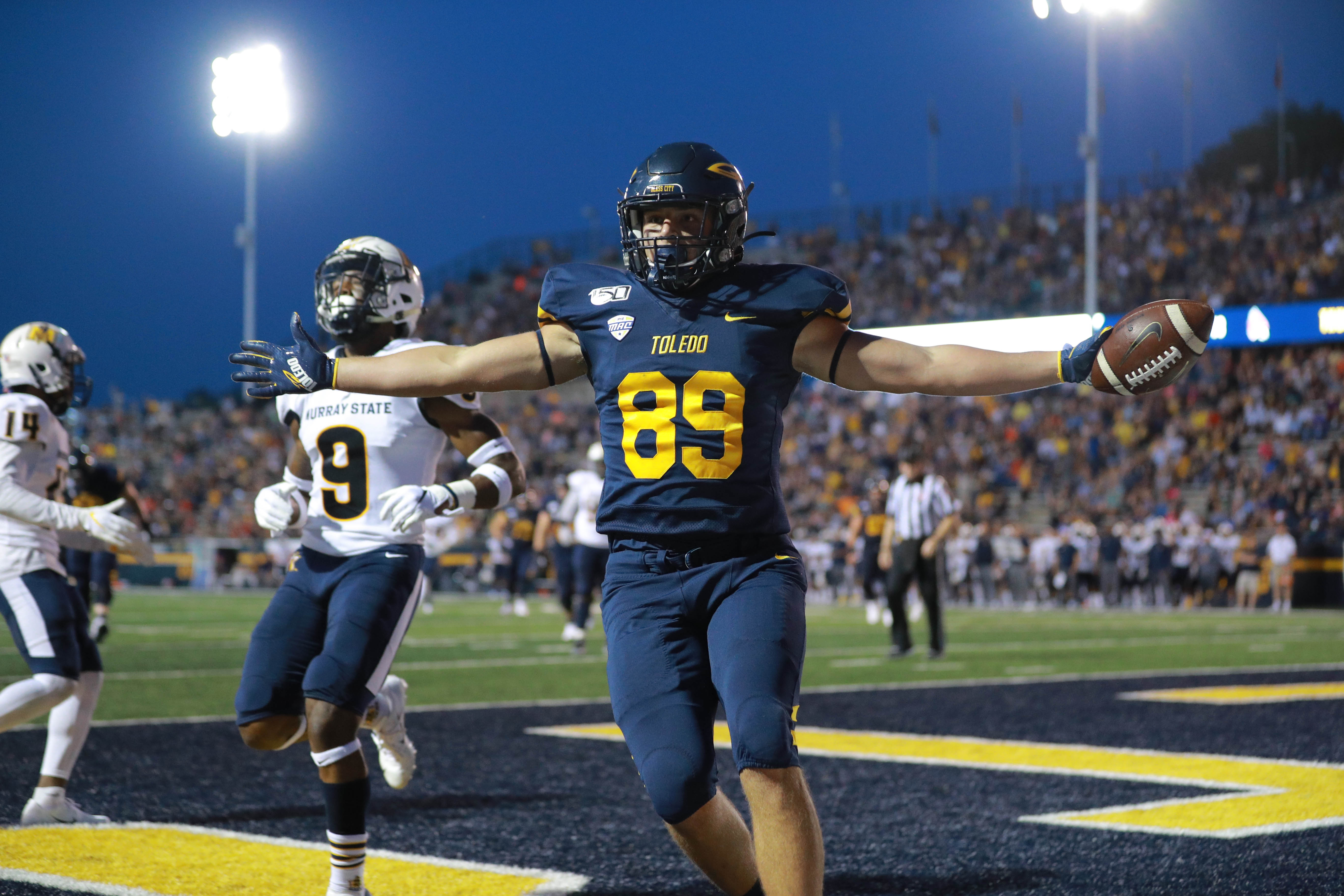 A two-time Academic All-MAC honoree, Rocket senior tight end Drew Rosi graduated with a bachelor’s degree in finance from the College of Business and Innovation.

“When I was younger I used to listen to my dad’s stories about how it was when he was here,” Rosi said. “It’s cool being here and seeing his picture in the tight end room. It’s a great place to be and I’m very fortunate to have the opportunity to play where he did.”

Earning the chance to be a Division I student-athlete is an accomplishment in itself, let alone becoming an important contributor on a team. And if there was one person who knew what it felt like to stand in his shoes, it was his father.

“I know the dedication and hard work it takes to just being available, and enduring all the bumps and bruises,” Steve Rosi said. “It means a lot to see him out there. I still get chills.”

He has been happy to serve as a resource for his two sons.

“They know I’m here and I’ve obviously shared a lot with them over the years,” Steve Rosi said. “But I also know they take care of their business and do things the right way. As a father, I’m actually proud of the times they don’t lean on me because I know they’re doing OK on their own and thriving.”

Drew Rosi’s Toledo journey didn’t end with the Dec. 6 virtual commencement ceremony. The Rockets’ final regular-season game is Saturday, Dec. 12, against Central Michigan, and he has also enrolled in the master of business administration graduate program. The door is not closed on his playing career either; all football student-athletes in NCAA Division I will not accrue a year of eligibility this season, meaning he will be able to return in 2021 if he so desires.

Rosi plans to pursue professional football opportunities that become available once he leaves Toledo, and his dream job isn’t far removed from his pigskin dreams. He would like to put his finance degree to use and become the CFO of an NFL franchise.

“It’s been one of the best decisions I’ve ever made,” Rosi said. “Being able to graduate college and pursue a career in football or finance or something else entirely, my time at Toledo will give me the opportunity to be successful in whatever I do. It’s something you dream about when you’re a kid.”