As Terry O’Brien approached the completion of his associate’s degree in liberal studies from Lorain County Community College (LCCC), he was curious about the College’s University Partnership Program.

He wandered into LCCC’s University Partnership Ridge Campus, not knowing how a simple inquiry would change his academic future. O’Brien looked at what all universities in the program offered. One stood out among the rest — UToledo.

Two years later, O’Brien, now 70, will graduate with his bachelor’s degree in liberal studies from UToledo this month.

From having a rebellious childhood and dropping out of high school to receiving his GED in 1971, life hasn’t always been a straight path for O’Brien. Leaving the restaurant industry after 45 years, he took the opportunity to go back to school and receive his college degree.

“This was a great opportunity to fulfill my dream and cover the one regret I had in my life,” O’Brien said. “And I didn’t feel like I was totally done with my learning career when I got my associate’s degree. It was an easy choice that I needed to move on.”

O’Brien, who lives in Chardon and took all his classes online, decided to continue his education in liberal studies because it combined many of his academic interests including writing and research. Because of the broad course offerings in the program, he chose classes that were challenging and piqued his interest.

“The main thing is that I like to find out things for myself and make decisions for myself,” O’Brien said. “I chose classes that I was attracted to but also chose things that were out of the box.” 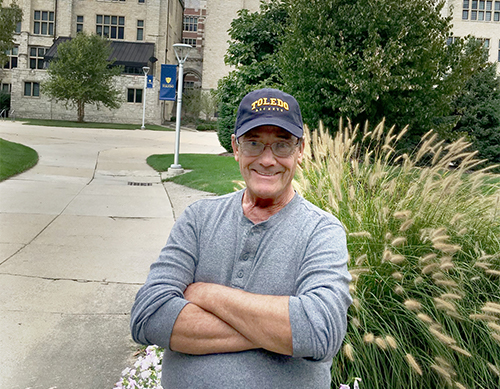 Being an online student and older than many of his peers presented challenges for O’Brien but he didn’t let anything — even a computer issue — get in his way. Faculty and staff from both UToledo and LCCC, and even his daughter, were eager to help him through any problem he faced.

Jackie Thompson, formerly O’Brien’s academic advisor and now working in the Judith Herb College of Education, was his main source of support. Whether it was working through the application process to UToledo or a question about a class, O’Brien knew he could always find guidance from Thompson.

“Terry was one of the most committed and persistent students with a true passion for education that I have met in a long time,” Thompson said. “Terry’s passion and success came from a place of a true desire to learn and a genuine interest to soak up the subjects of his courses. His unique perspectives not only made him fun to work with but will help him in being successful outside of the classroom.”

As this chapter ends, O’Brien is ready for the next one to begin. What he will do next is still in the works, but his list is long — including getting back to his love of music, playing guitar for patients at local hospitals, traveling and even going to graduate school for liberal arts or clinical mental health counseling.

“It’s always one day at a time,” O’Brien said. “There’s no guarantees about tomorrow.”

While O’Brien dons his cap and gown to celebrate his achievements with his family at Commencement on Dec. 18, he’ll be celebrating something else as well — his 71st birthday.

“I’ll just be happy to wear that cap and gown and be on campus,” he said. “I can’t wait to have that feeling of being at the University.”