Dr. Joey S. Kim, assistant professor in the Department of English Language and Literature at The University of Toledo, recited her new poem “To Work” at the swearing-in ceremony of Toledo Mayor Wade Kapszukiewicz for his second term.

“I am honored to have been invited to write and read a poem to capture this moment in the city’s history,” Kim said. “I wanted to convey a message of honest, authentic hope for what is to come in the city’s future. Toledoans have such a benevolence of spirit and dedication to caretaking and shared labor. I wanted to honor these ideas through the metaphor of spiritual practice, hence ‘to work is to pray,’ as something with lasting effects for human connection.” 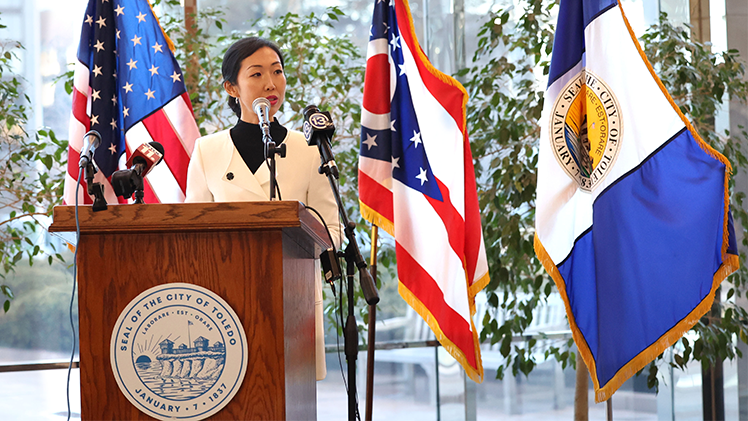 “Dr. Kim’s poem was astounding,” Kapszukiewicz said. “Even though she has lived in myriad different cities, she has chosen to make Toledo her home. That means something. Her poem perfectly reflects the diversity and grit of our residents, all of whom have dreams and aspirations for a bright future and work hard to achieve them. You will do better in Toledo because we are a community that embraces growth, change and solidarity.”

In “To Work,” Kim found inspiration in the city’s long history of glass manufacturing and art, as well as its location on the banks of the Maumee River and the shores of Lake Erie.

“Inspired by the work to revitalize the city’s arts through projects like the Glass City River Wall, I started by honoring the indigenous peoples whose land Toledo now occupies,” Kim said. “I then used a combination of glass, water and natural imagery to speak to the city’s history and future growth through overarching themes of community and togetherness amidst overwhelming hardship.”

She acknowledged the COVID-19 pandemic in the poem, striking an optimistic note: “We are a city of makers, doers, thinkers, artisans, creatives, dreamers, advocates, innovators and visionaries seeing through and beyond this moment.”

As the daughter of doctors who were immigrants from South Korea, Kim grew up in Ohio speaking Korean as her first language.

“Dr. Kim is a treasure to The University of Toledo and to our city,” Kapszukiewicz said.

We are stewards of these lands of the Seneca, Erie, and Odawa peoples

land verdant, green, ripe to the touch of hands

as our city seal states,

Our work an ode to

the Maumee, the lakes, the waters meeting sand

We melt, refine, forge beauty from a crucible borne not only of strife but

constant caretaking and a collective “you will do better” here so

today, we can greet each other not as strangers but as fellows of a place

open to change and growth amidst hardship and uncertainty.

We are a city of makers, doers, thinkers, artisans, creatives, dreamers, advocates, innovators, and visionaries seeing through and beyond this moment.

Ready to enter this new season,

we let the river run, watch it cascade over the cooling glass,