You can think of the human digestive system as a megacity for microorganisms.

Though imperceptible to us, tens of trillions of microbial cells call our gut home, assisting in digesting the food we eat, providing protection from harmful pathogens we encounter, even releasing important neurotransmitters. 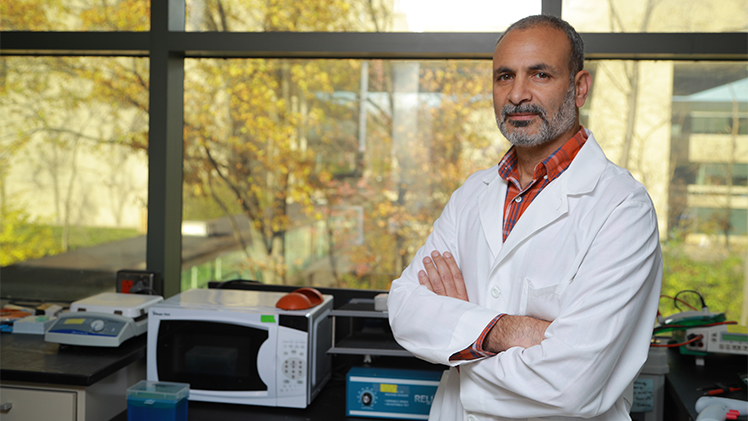 Dr. Zahoor Shah, professor of medicinal and biological chemistry in The University of Toledo College of Pharmacy and Pharmaceutical Sciences.

As we age, however, the demographics of that city shift.

“The diversity of our microbiota changes with aging,” said Dr. Zahoor Shah, professor of medicinal and biological chemistry in The University of Toledo College of Pharmacy and Pharmaceutical Sciences. “Not only is the overall diversity lower, but we also see higher levels of harmful bacteria and lower levels of beneficial bacteria. This has real effects on health and well-being.”

An imbalance in the gut microbiota — known as gut dysbiosis — has been linked to a number of conditions in recent years, ranging from high blood pressure to autoimmune disorders.

Shah, a neurobiologist who studies brain aging and neurodegenerative diseases, is now focusing on how those changes in gut microbiota may also be connected to the cognitive decline some people experience as they age.

“All of these neurodegenerative diseases, including Alzheimer’s Disease, start with inflammation,” Shah said. “We believe microbiota dysbiosis results in neuroinflammation in the brain leading to cognitive decline. We’re learning more and more about the gut-brain axis, but there aren’t many studies that have investigated this specific process.”

Shah’s lab has already completed initial research that examined neuroinflammation and gut bacteria composition in aged mice, as well as how other chronic illnesses that cause inflammation may lead to changes in gut bacteria and cognitive function.

The study found chronic inflammation elsewhere in the body can lead to gut dysbiosis, neuroinflammation and symptoms that mimic early onset dementia in middle-aged mice.

The results, which have yet to be published, also found the onset of dementia was especially prevalent in normal-aged female mice. Researchers already know that women are at a higher risk of developing Alzheimer’s — women are roughly twice as likely as men to develop the disease.

Shah said the study addresses important questions about what happens in our brain and gut as we age, and how those changes are interconnected.

“It’s very critical to find out what’s happening in the aging process, in normal aging and those with comorbidities like diabetes, cardiovascular disease or anything else that leads to chronic inflammation,” he said. “Aging naturally causes some inflammation, but if there’s already a comorbidity that is causing any kind of inflammation, that increases the chance of this gut microbiota dysfunction and, we believe, increases the chances of cognitive decline.”

Shah hopes to leverage the data his lab has already collected to secure a grant that could fund a larger, more in-depth study to further examine the phenomenon and look for specific proteins that could serve as useful biomarkers for dementia.

He’s also interested in studying whether slowing or stopping inflammation, either through drugs or probiotics, might be successful at delaying or preventing cognitive decline.

“The origin and progression of Alzheimer’s is very complicated but focusing on stopping the initial source of inflammation as opposed to trying to stop Alzheimer’s Disease itself might be a smart way to make a difference as we continue to learn more about this debilitating condition,” he said.