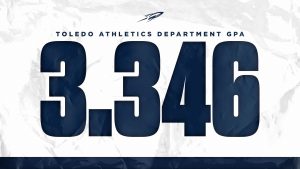 Other highlights from this past semester include:

“We are very proud of the consistently outstanding efforts in the classroom by our student-athletes,” O’Brien said. “We have a proud tradition of academic success at The University of Toledo, and once again our student-athletes lived up to those very high expectations.

“Special recognition goes to Head Coach Brie Globig and our women’s swimming & diving program for posting our highest team GPA. I would also like to recognize and thank our Student-Athlete Academic Services staff for their continuing efforts on behalf of our student-athletes, as well as the dedicated University faculty, staff, coaches and parents who support and nurture their efforts in the classroom.”

“The Student-Athlete Academics Services department would like to congratulate all student-athletes on another record-breaking semester,” said Associate Athletic Director for Student-Athlete Academic Services Tony Belt. “The Athletic Department at The University of Toledo is raising the standard for our student-athletes academically and they have stepped up to the challenge.”