Researchers at The University of Toledo have received a three-year funding award of $1.4 million from the U.S. Department of Defense for a pre-clinical study of promising new chemotherapy aimed at triple negative breast cancer.

The treatment, which relies on a unique cell death pathway, could prove to be critical in overcoming the multidrug resistance that often characterizes and limits the therapy options for triple negative breast cancer. 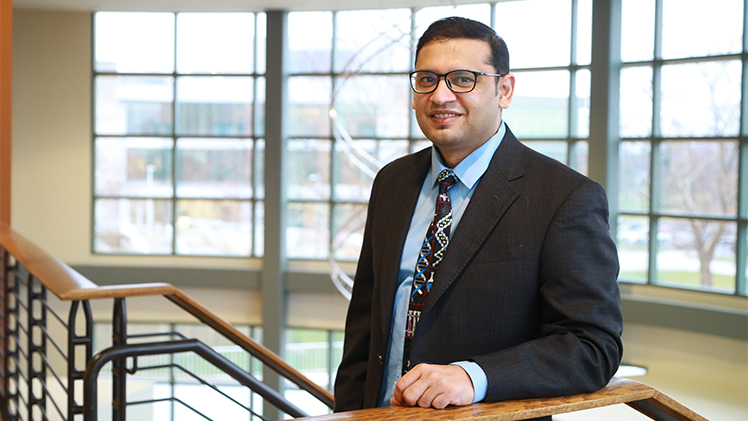 “Triple negative breast cancer is perhaps the most aggressive, recurrent and difficult-to-treat breast cancer. Patients with residual, resistant tumors have a six times higher rate of distant recurrence and are 12 times more likely to die. Treatment options are limited and for many patients, the prognosis is extremely poor,” said Dr. Amit K. Tiwari, an associate professor in the UToledo College of Pharmacy and Pharmaceutical Sciences who identified the therapy and is the principal investigator. “Drug discovery is a long road but we have come a significant distance already. We have found a molecule that is safe, effective and can overcome resistance to other therapeutics.”

Most other chemotherapy drugs kill cancer cells by apoptosis, a process that programs the cells to shrink and break down on multiple fault lines. The compound discovered by Tiwari instead causes cancer cells to swell and burst. When the cells rupture, they release markers that help activate the body’s immune system to target and kill neighboring cancer cells more effectively.

“Our research has shown this drug is killing the cancer cells in multiple different ways,” Tiwari said. “Even the most resistant cancer cells are responding.”

While traditional chemotherapy may initially work, many patients soon develop resistance to those therapies, allowing the cancer to spread to distant organs unchecked. Tiwari’s research has shown UToledo’s drug appears to be able to treat triple negative breast cancer even in cases where the cancer cells have developed mutations in the apoptosis signaling pathway and thus resistance to conventional chemotherapy.

The UToledo team has already shown the drug works in animal models and human triple negative breast cancer cells in the lab. With the Department of Defense funding, researchers will seek to understand the chemical structures necessary to produce unique non-apoptotic cell death and optimize additional analogues of the lead molecule, continue to evaluate its action on patient-derived tumors and better understand the protein targets that induce cancer cell death.

Prior research suggests UToledo’s compound acts on a protein in the mitochondria called Dynamin related protein 1, which is often highly expressed in triple negative breast cancer. Better understanding the mechanism as how targeting mitochondrial protein leads to unique cell death is one of the primary goals of the Department of Defense funding in order to advance the research to clinical trials in humans.

Uncovering new treatments for drug-resistant cancer is one of Tiwari’s primary aims. He has devoted more than a decade to studying multidrug resistance in various types of cancers and finding innovative ways to overcome those.

In 2018, Tiwari received nearly $450,000 in grant funding from Susan G. Komen Northwest Ohio to support drug development research. The data generated from that funding helped secure the larger Department of Defense funding, and he cites the support and friendship of triple negative breast cancer survivor and Komen advocate Melissa Paskvan and Mary Westphal, executive director of Susan G. Komen Northwest Ohio, for helping to inspire his work throughout the project.

“What we’re doing in this drug resistance is extremely important. Very few people work in this area because of the complexity,” Tiwari said. “Most of the molecules that are developed to target triple negative breast cancers are focused on early-stage cancers. I want my research to give patients hope that there may soon be treatments even at the later stage of the disease.”