Men’s cross country runner Jacob Harris and football player Bryce Harris have been named Distinguished Scholar Athletes from the 2020 fall season by the Mid-American Conference. The awards were received following strong contributions in the field of competition and exemplary work in the classroom.

Jacob Harris earned first-team All-MAC honors after finishing in seventh place with a time of 24:25.4 at the 2020 MAC Men’s Cross Country Championships on Nov. 21. A sophomore, Harris is majoring in exercise science and holds a 3.743 GPA.

Bryce Harris earned first-team All-MAC honors as a center on the Rockets’ football team in 2020. Harris holds a 3.765 GPA in his school counseling graduate studies. He received his bachelor’s degree in psychology in May 2019.

The Distinguished Scholar Athlete is given to student-athletes who made an All-MAC team, the Academic All-MAC team and maintained a cumulative GPA of at least a 3.5. Following each season, any student-athlete with a 3.20 GPA and participation in at least 50% of the contests is automatically named to the Academic All-MAC Team for each sport. First-year students and junior college transfers in their first year of residence are not eligible for the award. 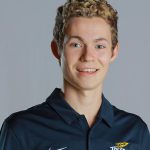 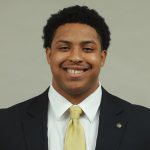