Matt Eberflus, a starting linebacker at The University of Toledo from 1988 to 1991 who served on the coaching staff from 1992 to 2000 before working as an assistant coach in the NFL for more than a decade, was recently announced as the head coach of the Chicago Bears.

He is the first former Rocket student-athlete to serve as an NFL head coach. 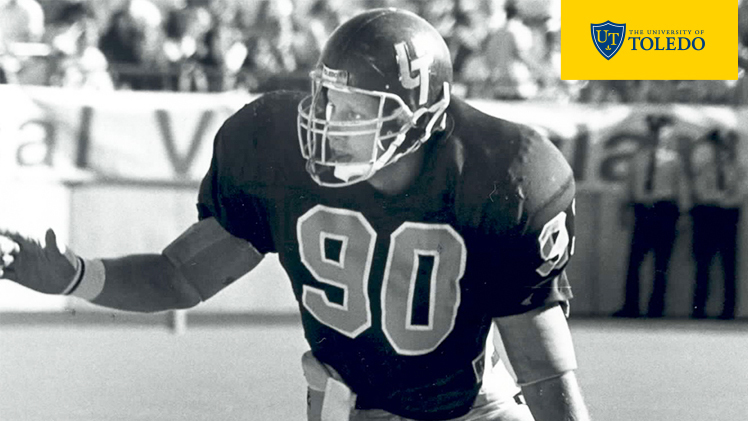 Matt Eberflus lettered in football as a linebacker at UToledo, earning first-team All-MAC honors as a junior and senior. In 2004, he was inducted into the Varsity T Hall of Fame.

A graduate of Whitmer High School in Toledo, Eberflus, 51, lettered in football as a linebacker, earning first-team All-MAC honors as a junior and senior.

He had 325 tackles in his career, including a team-best 89 as a junior and 138 as a senior. As a junior, Eberflus helped lead the Rockets to a 9-2 record and a MAC co-championship. During his senior season, Eberflus served as a co-captain and was chosen for the Nicholson Award as the team’s Most Valuable Player.

At the press conference announcing his hire, Eberflus thanked former University of Toledo coaches, Gary Pinkel (1991-2000) and Nick Saban (1990), head football coach at the University of Alabama, who mentored him as a player and as a coach.

“I was fortunate enough to get a job at 22 years old at The University of Toledo for a guy named Gary Pinkel,” Eberflus said. “He’s been special all the way through my career. He’s getting into the College Football Hall of Fame this year … what an outstanding example he was for me at a young age. I was with him 17 or 18 years.

“I got a chance to play for a guy my junior year that showed me how to come into an organization and change the culture and change the mindset of that [organization]. I was living it because I was a player. I’ve stayed in touch with him and that’s Nick Saban. I really want to appreciate the example that he’s given me.”

Eberflus received his bachelor’s degree in education from UToledo in 1993 and, in 2004, was a Varsity T Hall of Fame inductee.

He is the 17th head coach in Bears franchise history.