Dr. S. Amjad Hussain, professor emeritus of thoracic and cardiovascular surgery and humanities and UToledo trustee emeritus, has been elected as a Foreign Fellow of the Pakistan Academy of Science. 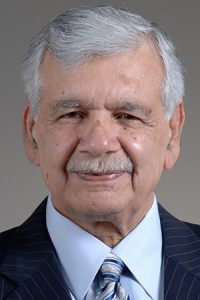 The Pakistan Academy of Science in Islamabad, Pakistan recognizes Foreign Fellows as “scientists who are nationals of countries other than Pakistan, and who are eminent for their contributions to science.”

“I was delighted to learn about this election to this prestigious organization,” Hussain said.

In 2019, Hussain gave a lecture in Islamabad about humanities and why the study of humanities is important for students of science.

He was nominated by one of the current fellows for the lifetime appointment.

“Your rich experience, vast knowledge and expertise will certainly add to the prestige of the Academy,” wrote Dr. Tasawar Hayat, the academy’s secretary general, to Hussain in the notification letter.

The Pakistan Academy of Science is a non-governmental and non-political supreme scientific body of distinguished scientists in the country. The government of Pakistan has given the consultative and advisory status to the academy “on all problems relating to the development of scientific efforts in the country,” and “generally on such matters of national and international importance in the ﬁeld of science as may be referred to the academy.”

Hussain said that he plans to visit the academy again and give another lecture.