Before Dr. Blair Grubb became a doctor, he was an electrician. 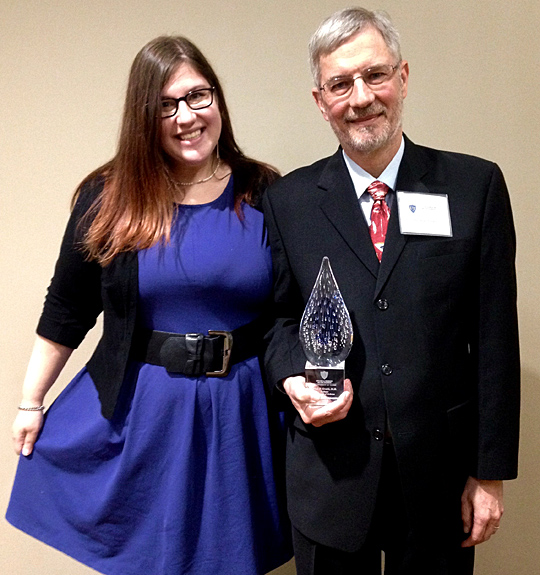 : Dr. Blair Grubb posed for a photo with his daughter, Helen, after receiving the UT College of Medicine and Life Sciences’ Career Achievement Award in January.

“It’s nice to be recognized for having chosen to spend my career here,” Grubb said. “As you get older, you always wonder how you’ve spent your life, so it’s a nice feeling to say that I did the right thing.”

This award arrives on the heels of two other large accolades he received in 2015: He is Dysautonomia International’s Physician of the Year as well as the British Heart Rhythm Society and Arrhythmia Alliance’s Medical Professional of the Decade.

But to look at Grubb’s success, it’s important to understand how he got here. A native of Baltimore, he began his career as an electrician before deciding to go into medicine.

Grubb earned a degree in biologic sciences from the University of Maryland in Baltimore County and his doctor of medicine from the Universidad Central del Este in the Dominican Republic. He completed his residency at the Greater Baltimore Medical Center, where he also was chief resident.

It was because of a mistaken rotation at Johns Hopkins Hospital that he found his passion. He was supposed to complete a rotation in general cardiology, but because there were too many people in the rotation, he was placed in a rotation for a new field at the time — cardiac electrophysiology.

Soon after, he completed a fellowship in cardiology and cardiac electrophysiology at Pennsylvania State University.

In 1988, Grubb and his wife of 38 years, Dr. Barbara Lynn Straus, moved to Toledo along with their daughter, Helen. Shortly afterward, Straus gave birth to their son, Alex.

Today, Grubb leads the Electrophysiology Program as well as UT Medical Center’s Syncope and Autonomic Disorders Clinic, where he sees patients from all over the United States and the world. He has helped develop the field of autonomics and has pioneered many of the diagnostic and treatment modalities that are in common use today.

“People with autonomic disorders frequently come to us in wheelchairs,” Grubb said. “The most rewarding thing for me is to take people whose lives have been taken from them and restore them to something resembling a normal life. And not only doing that on a personal basis, but also helping build the structure of a new specialty of medicine, which is really what autonomics has become.”

Though Grubb has worked tirelessly for years, he credits most of his success to his wife, who passed away in 2015 at the age of 64. He said that without her, he wouldn’t have succeeded in academia, having come from a vocational school.

“I freely admit that if I’ve had any success in life it’s because of my wife,” Grubb said. “I was truly a diamond in the rough, and my wife was the exact opposite. She really provided a structure to my life that I needed.”