UToledo Theatre Student to Direct Production of ‘The Flick’

The University of Toledo Department of Theatre and Film will present Annie Baker’s Pulitzer Prize-winning drama, “The Flick.” It will be directed by theatre student Justin Petty, a senior who will graduate in May.

Performances will take place Friday through Sunday, Feb. 7-9 and 14-16, in the Center for Performing Arts Center Theatre. Curtain time is 7:30 p.m. Friday and Saturday; Sunday shows are at 2 p.m. 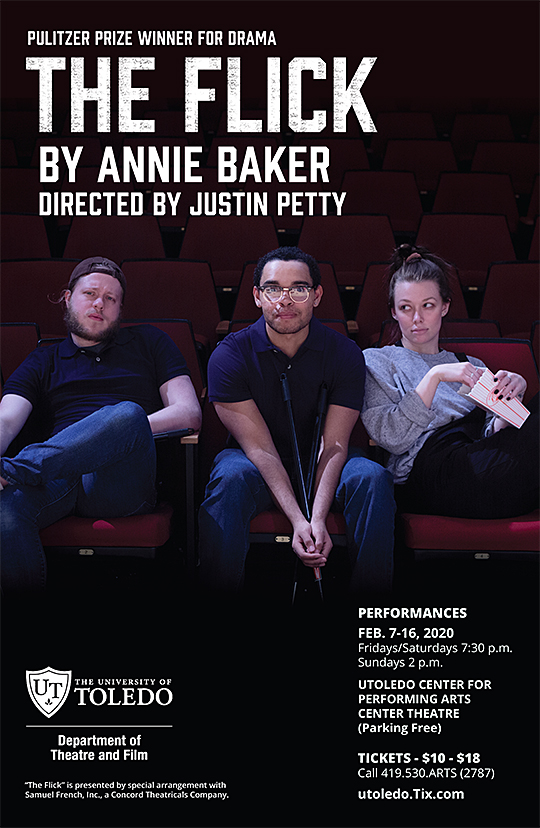 “The Flick” follows three underpaid employees in a run-down movie theater who attend to one of the last 35mm film projections in the state — a hilarious and heart-rending cry for authenticity in a fast-changing world.

“We’re committed to our students having the experiences that prepare them for entering the professional community once they graduate. We try to bring student designers, technicians and performers to positions of leadership and responsibility inside our departmental season pretty quick during their time here at the University,” said Dr. Matt Foss, UToledo assistant professor of theatre and an advisor on the project. “The opportunity for Justin to be an artist leader on this collaboration was one we were excited to make happen for him and the team involved on the project.”

“The University has helped me foster a new outlook on theatre-making. It has helped me become more precise and helped me understand how to make and find stories that not only represent but highlight the struggles of being a minority,” Petty said.

When choosing “The Flick,” Petty said, “I’m glad I came about this play when I did. It really speaks truthfully on being a youth in our society today, while also highlighting the microaggressions that happen on a scale that everyone can relate to.”

He added he is glad that UToledo allowed him to take a risk with the play and really trust and challenge him with this production.

He has several UToledo theatre credits, including “The Pillowman,” “All Quiet on the Western Front,” “Arcadia,” “The Internationalist” and “The King and the Clown.”

Petty also has studied abroad at the Moscow Art Theatre in Russia with The University of Toledo and Wayne State University.

“The Flick” is presented by special arrangement with Samuel French Inc., a Concord Theatricals Company.