A multidisciplinary research group at The University of Toledo has been awarded $2.3 million from the National Institutes of Health (NIH) to develop a vaccine against a bacterial infection that, once established, is nearly impossible to eradicate.

Pseudomonas aeruginosa is a common bacterium that is generally harmless to healthy individuals. However, in people with compromised immune systems or specific conditions such as cystic fibrosis, it can be deadly. 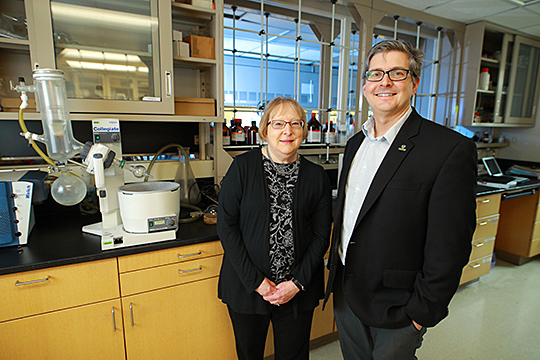 Dr. Katherine Wall, professor and chair of medicinal and biological chemistry, and Dr. Steven Sucheck, professor of chemistry and biochemistry, have received a $2.3 million from the National Institutes of Health to develop a vaccine for Pseudomonas aeruginosa.

Chronic lung infections, including those caused by drug-resistant Pseudomonas aeruginosa, are the leading cause of death in cystic fibrosis. For example, 60% of individuals with cystic fibrosis experience such an infection, which is often chronic and leads to serious morbidity or mortality. In addition, ventilator-associated pneumonia represents a serious, and often deadly, hospital-acquired infection most commonly caused by infections from the bacterium.

“Pseudomonas, and many other bacteria, are becoming increasingly resistant to even the best currently available antibiotics. It’s a major source of hospital-acquired infections and has a high mortality rate,” said Dr. Katherine Wall, professor and chair of the UToledo Department of Medicinal and Biological Chemistry in the College of Pharmacy and Pharmaceutical Sciences, and principal investigator on the NIH grant. “The infection is very hard to get rid of once it gets established.”

The Word Health Organization recently placed the bacterium among the most critical antibiotic-resistant pathogens, particularly because of the threat it poses in healthcare settings. In the United States alone, more than 32,000 infections of multidrug-resistant Pseudomonas aeruginosa occurred in hospitalized patients in 2017, causing an estimated 2,700 deaths. Thousands more deaths occurred worldwide. In addition to lung infections, Pseudomonas aeruginosa can cause serious blood infections.

Researchers have been working on vaccines targeting the bacterial infection for decades, but as development of new antibiotics lags, preventing the infection has taken on a new urgency.

A 2016 report commissioned by the British government, for example, found antimicrobial resistance could cause up to 10 million annual deaths and cost $100 trillion in economic damages by the year 2050.

The five-year NIH grant, which comes through the National Institute of Allergy and Infectious Diseases, will fund UToledo research aimed at developing new methods for creating synthetic vaccines and a workable vaccine that could protect against Pseudomonas aeruginosa.

“There have been many attempts to make protein and carbohydrate vaccines. One thing that is unique about this project is that we are combining well-defined organism-specific carbohydrate antigens with organism-specific protein antigens,” said Dr. Steven Sucheck, professor in the Department of Chemistry and Biochemistry in the College of Natural Sciences and Mathematics, and lead principal investigator on the grant.

Antigens are the toxins from a bacteria or virus that trigger the body’s immune response.

Many of the common vaccines we receive in childhood, such as chicken pox and polio, are manufactured with dead, weakened or altered pathogens to generate immunity to the infection.

Synthetic carbohydrate vaccines instead use complex chemistry to create well-defined carbohydrate antigens that can be conjugated with proteins to create a vaccine.

Sucheck and Wall have been collaborating on vaccine development for more than a decade, beginning with a project to develop synthetic vaccines to help the body’s natural immune system better engage against cancer cells.

The new Pseudomonas aeruginosa project, which also includes Dr. Erin Prestwich, assistant professor in the Department of Medicinal and Biological Chemistry, is a significant expansion of that, taking the basic vaccine development platform and shifting its target to bacteria rather than tumor cells.

Sucheck also is working on discovering new drugs to fight tuberculosis, another bacterial infection that is becoming increasingly difficult to treat because of antibiotic resistance. In 2018, he and a former colleague now at the University of Nebraska received a five-year, $2.1 million NIH grant to continue their work.

“There’s an expertise in the lab related to carbohydrates that we’re trying to leverage in different ways. You can use them to make vaccines, or we can try to target bacteria such as Mycobacterium tuberculosis with small molecules. That’s the broader theme that runs through my work,” Sucheck said. “We’re always trying to do work that’s impactful and addresses an urgent need. New approaches to treating drug-resistant bacteria is one of those urgent needs.”