At age 20, Liam Walsh, a UToledo junior double majoring in political science and law and social thought, has a six-page resume documenting his activities and accomplishments. 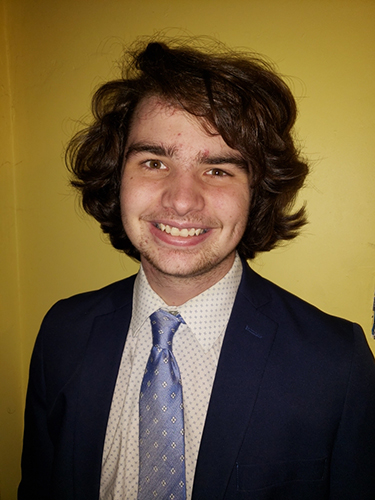 Being so involved in various community-minded organizations, he said, is just part of his life.

“It was always my thing growing up,” Walsh said. “In high school, I was involved in almost too many things and that carried over to college. I did it almost out of habit.”

Keeping busy as a student and campus leader is certainly not unique to Walsh, though his story does have an interesting twist: He is a commuter student from Rossford who doesn’t drive.

“I literally cannot drive,” Walsh said. “I never got my driver’s license and I’ve only sat behind the wheel of a car maybe twice in my life.”

Walsh, who lives at home with his family, mostly relies on his family and public transportation to get to Main Campus and around the area for classes and campus group meetings and events. Friends help with rides as well.

It’s been that way since the beginning of his freshman year at UToledo in fall 2019. That’s also when Walsh joined Alpha Phi Omega, “to get involved and make friends,” he said.

He liked the service organization and its community work so much that he stuck around. And when the pandemic changed how community-minded groups engaged with the community, Walsh, who by then was Alpha Phi Omega’s vice president of service, worked with other fraternity members to help usher in a new way for them to do things, including, for example, leaving random and anonymous sticky notes of encouragement at local grocery stores for strangers to find as well as working through engaging remotely.

Alpha Phi Omega members on other campuses took notice of what the UToledo group was doing and rewarded them with the 2021 designation as best service fraternity in the region and section.

And in December, Walsh and the other members of Alpha Phi Omega learned that they received the Dean Arno Nowotny National Service Award given annually to the best Alpha Phi Omega service fraternity in the nation, a first for The University of Toledo. 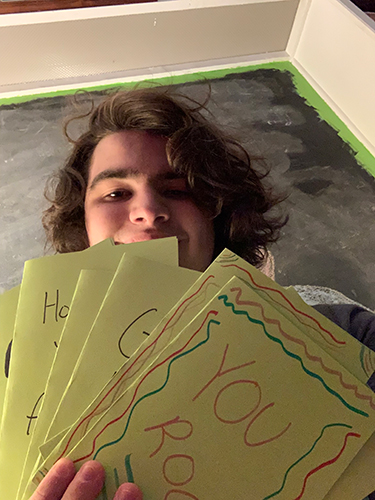 Liam Wash shows some of the cards he and other members of Alpha Phi Omega Service Fraternity made in April to give to healthcare workers in a local hospital as part of a 24-hour marathon of service projects.

Walsh, who is now president of the service fraternity, also was recognized as “brother of the year” as the outstanding member of the region.

“It’s pretty cool for our small chapter, which had 20 to 30 people in it, to not only be recognized but to be recognized on the same level with these major chapters across the nation,” Walsh said.

He noted that the number of service hours performed by the fraternity wasn’t what earned them the top award. “It was the quickness in which we turned from a service fraternity that served the community in-person to one that served online, and then kept rolling with the punches” that the pandemic kept throwing.

“We realized that we can’t do what we did before. So we had to pivot to, How can we help in this new world?” Walsh said.

Being so heavily involved in the UToledo community presents its challenges.

As Renee Heberle, professor of political science, co-director of the Program in Law and Social Thought and coordinator of the Inside/Out Prison Exchange Project, who Walsh considers a mentor, said, “When he told me once that he was on 17 ‘GroupMe’ lists, I thought, ‘hmmm … maybe we should talk about time management and prioritizing.’ I found that he was already aware of what it means to set boundaries and to prioritize, and like the rest of us, is a work in progress.

“Liam is such an open, friendly and smart person — of course everyone wants him on their side and on their team.”

Walsh said he has learned through personal experience and advice from Heberle and others that he needs to find balance in his life — as a student and as a campus leader.

“It’s definitely a struggle,” Walsh said. “But being so involved has helped me learn where my limits are and to take those important breaks from things. I think I learned during COVID that you can get over-involved. You can’t do a million things well, so maybe you don’t take a leadership role but you just be involved.

“You’re not going to be a good leader if you’re trying to lead seven groups.”