The induction ceremony took place Jan. 31 at the Alexander in Indianapolis. 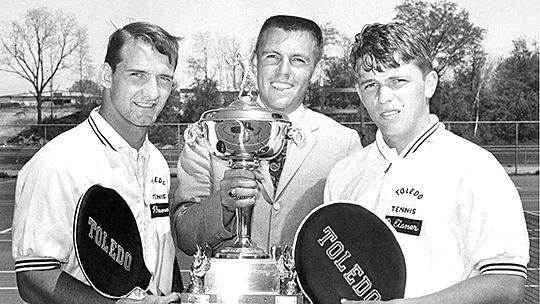 A native of Ann Arbor, Mich., Eisner coached at the Division I level for 37 years, coaching through 755 matches for a combined win-loss record of 523-231-1.

Eisner coached at The University of Toledo from 1963 to 1969 and led the Rockets to four consecutive Mid-American Conference Championships from 1965 to 1969. He also led Rockets to 12 individual and nine doubles titles at the MAC Championships. Eisner’s dual-meet record at Toledo was 74-30-1.

Following his tenure at Toledo, Eisner coached at the University of Michigan for 31 seasons, winning 18 Big Ten Conference Championships, including a streak of 16 consecutive titles. Eisner also was named Big Ten Men’s Tennis Coach of the Year four times and coached six Big Ten Players of the Year and 12 collegiate All-Americans.

Eisner played collegiate tennis at Michigan State University, where he was a finalist in the 1960 Big Ten singles championship and was a team captain in 1961 and 1962.

He is a member of The University of Toledo’s Varsity T Hall of Fame, as well as the Intercollegiate Tennis Association Men’s College Tennis Hall of Fame and Michigan Athletic Hall of Honor.