The University of Toledo women’s basketball team dismantled Bowling Green in an 80-51 win before a crowd of 5,029 at Savage Arena on Saturday. Toledo outscored the Falcons in all four quarters and were never seriously challenged. 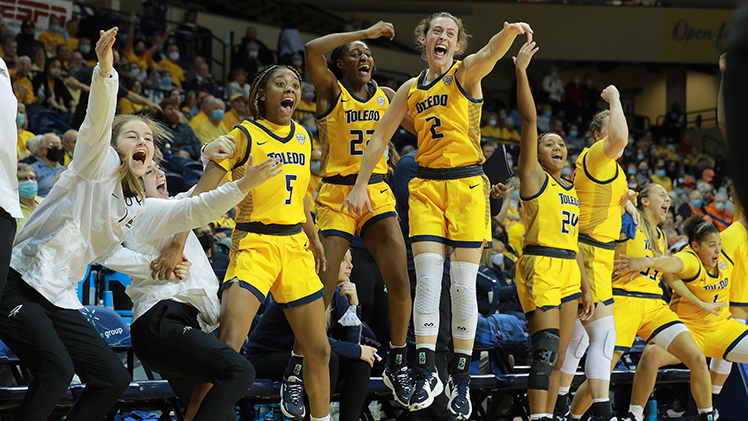 By virtue of Saturday’s win and Buffalo’s (16-8, 10-4 MAC) 69-64 loss to Northern Illinois, first-place Toledo now holds a three-game lead over the Bulls in the Mid-American Conference standings.

“I’m really proud of how our players played today, especially defensively,” head coach Tricia Cullop said. “To hold a great three-point shooting team like Bowling Green to just two made threes is outstanding. I thought that was a big key to the game. I thought we let them get to the free throw line too many times in the first half, but we did a better job in the second half.

“They’re a great team. I have a lot of respect for Robyn and what she does for their program.

“This is a great rivalry,” Cullop said. “Obviously last year we were on the other end of it, and our players really wanted to get a sweep this year. I’m proud of them, but in the grand scheme of things this is one game and pretty soon we’re going to face a team that beat us, and we need to get ready for that.”

Junior Quinesha Lockett scored a game-high 24 points, her 12th game with at least 20 points this season, and recorded a career-best five steals. Saturday was her third straight game with 20 points, and her 15 points in the first half helped the Rockets build an early lead they never relinquished.

“Quinesha is special,” Cullop said. “She’s not a one-dimensional player. She can play offense and defense, she can shoot threes and drive. I think her court vision has really improved this year; her understanding of what the defense is doing and getting the ball in the hands of who needs it. I think she’s really blossomed this year, but we also have a lot more around her.”

The Rockets held the Falcons to 28.0 percent shooting (14-for-50) and did not allow a single player to score in double figures, the first time they’ve held all opposing players to single-digit scoring since March 6, 2017 vs. Akron. BGSU’s leading scorer was Zoe Miller, who scored nine points off the bench.

Following Saturday’s game, Toledo will play three of the next four on the road, beginning with a road test at Ohio on Wednesday, Feb. 16.