The last of four finalists for the position of provost and executive vice president for academic affairs held open forums Thursday to engage with The University of Toledo faculty, staff and students.

Dr. Charles Robinson, vice chancellor for diversity and community at the University of Arkansas, discussed being more strategic about the teaching load for faculty to allow for additional research, as well as piloting mandatory attendance for freshmen in certain classes to improve student retention and graduation rates during his forums on Main Campus and Health Science Campus. 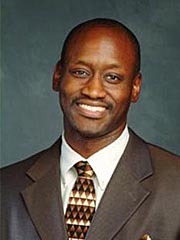 “I think we might be here today in a moment that is on the verge of defining a movement,” Robinson said. “That is the movement of UT from where you are in your mission to where you want to be in your vision. If you will allow me to come and humbly serve as your provost, I think that we can transform this moment into a movement.”

He began working at the University of Arkansas 17 years ago. He served as the chair of the Arkansas’ African and American Studies Program from 2004 to 2009, and then as vice chancellor for diversity and community. Last year, he also was named interim vice provost for student affairs.

Robinson received his PhD in history in 1997 from the University of Houston and his master’s degree from Rice University in 1990.

Prior to becoming a faculty member at the University of Arkansas, Robinson taught at Houston Community College for eight years.

For more information about the provost search and previous candidate forums, visit utoledo.edu/offices/provost/provostsearch.