As mental health professionals are grappling with a wave of pandemic-related anxiety and depression, a physician-researcher at The University of Toledo College of Medicine and Life Sciences is studying whether a commonly prescribed antidepressant might actually fight the effects of the coronavirus itself.

Better known by consumers under the brand name Prozac, fluoxetine is one of the most frequently prescribed medications in America. Primarily, it’s used to treat panic attacks, depression and obsessive-compulsive disorder. 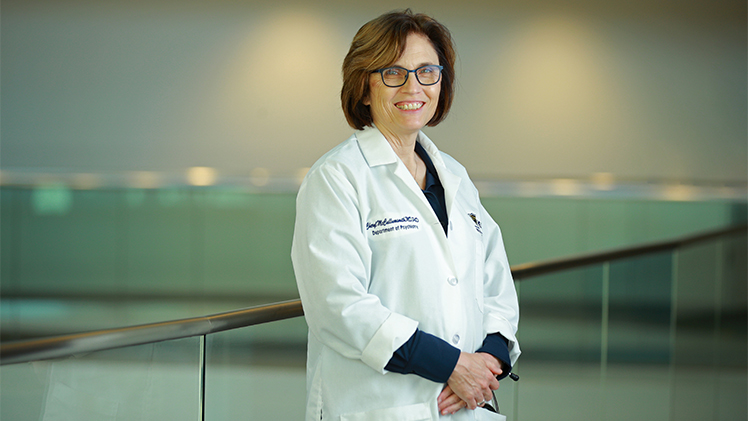 Dr. Cheryl McCullumsmith, professor and chair of the UToledo Department of Psychiatry, is leading a clinical trial through UTMC with the goal of determining whether fluoxetine can reduce serious COVID-19 outcomes such as hospitalization, intubation and death.

But as the pandemic established a foothold in the United States, Dr. Cheryl McCullumsmith, professor and chair of the UToledo Department of Psychiatry, recalled something else about fluoxetine — a significant amount of research has shown it to have impressive anti-inflammatory properties.

Even more intriguing was that fluoxetine has been shown to block expression of a cell-signaling protein called Interleukin-6.

“Interleukin-6 is kind of the signal that the body thinks it has to go all in to fight the infection, and the body’s all-in immune response is called a cytokine storm,” McCullumsmith said. “The body realizes it could die in the process, but it feels it’s at such risk from this virus that if it doesn’t do that it’s going to die anyway.”

That runaway immune response, which can quickly lead to multiorgan failure, is one of the leading causes of death in COVID-19 patients.

McCullumsmith is now leading a clinical trial through The University of Toledo Medical Center to administer fluoxetine on an outpatient basis with the goal of determining whether the drug can reduce serious outcomes such as hospitalization, intubation and death from COVID-19.

Earlier this month, a French study published in the high-profile journal Molecular Psychiatry found that COVID-19 patients who were taking antidepressants, including fluoxetine, were significantly less likely to be intubated or die from the disease.

McCullumsmith was not involved in that research, but said it adds weight to the theory that antidepressants may be useful in the battle against COVID-19.

“Fluoxetine is a well-studied, FDA-approved medication with a strong safety profile for its approved uses,” she said. “This investigation has tremendous potential. What we hope to show is people may still get sick, but the second stage, the toxic stage where people get intubated and have multiorgan failure, can be prevented.”

McCullumsmith also aims to study whether administering fluoxetine early after diagnosis might be able to prevent patients from having long-term side effects from their infection such as inflammation and lingering damage to the heart, lungs and other organ systems.

“If we can attenuate or stop the cytokine storm, what’s the impact on organ damage further down the road? We don’t really know what’s driving that,” she said. “This research could have major implications beyond just dealing with acute cases.”