Making her dreams come true, a recent graduate of The University of Toledo’s physics program is in the midst of a sky-rocketing year.

Dr. Nicole Karnath earned her Ph.D. last summer and quickly moved to California to serve as instrument scientist at the SOFIA Science Center, which is based in NASA Ames Research Center, where she flies regularly aboard the world’s largest airborne observatory. 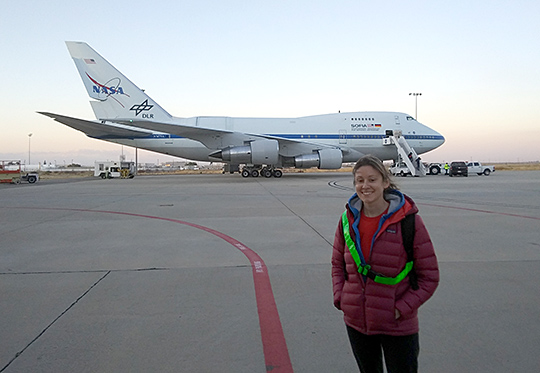 On top of her already soaring career success, this week the Astrophysical Journal published Karnath’s research completed while she was a UToledo student, sharing her discovery that reflects a new understanding of what happens at the early stages of star formation.

She credits her student research and the support of her advisor, Dr. Tom Megeath, UToledo astronomy professor, for the job offer from NASA before she had her diploma.

“I am very happy. I enjoy the science, and I love studying the universe,” Karnath said. “Astronomy is an international, collaborative field because we’re working on telescopes all over the world and taking in huge amounts of data. The opportunities are there for students to break in. UToledo astronomy professors know so many people all over the world. Take advantage of their expertise, connections and need for help analyzing data. That’s how I ended up here.”

“Nicole made one of the most exciting discoveries to come out of our UToledo star formation group,” Megeath said. “Just as a talent agent’s biggest dream is to find the actor or actress who will become the next star, for an astronomer, the dream is to find the blob of gas that’s in the process of becoming a star. Nicole has found four such blobs — collapsing gas clouds that are in the first 6,000 years of forming what is called protostar. In ‘star years,’ this is the first 30 minutes of their lives.”

While a graduate student at UToledo, Karnath was part of an international team of astronomers who used two of the most powerful radio telescopes in the world to create more than 300 images of planet-forming disks around very young stars in the Orion molecular clouds.

Pointing both the Very Large Array (VLA) and the Atacama Large Millimeter/submillimeter Array (ALMA) to the region in space where many stars are born, the result is the largest survey to date of young stars, called protostars, and their protoplanetary disks, or planets born in rings of dust and gas.

Among the hundreds of survey images, four protostars looked different than the rest and caught Karnath’s attention.

“These newborn stars looked very irregular and blobby,” Karnath said. “We think that they are in one of the earliest stages of star formation and some may not even have formed into protostars yet.”

It is significant that the scientists discovered four of these objects, which Karnath estimates to be younger than 10,000 years old.

“We rarely find more than one such irregular object in one observation,” said Karnath, who used these four infant stars to propose a schematic pathway for the earliest stages of star formation.

To be defined as a typical protostar, stars should not only have a flattened rotating disk surrounding them, but also an outflow — spewing away material in opposite directions — that clears the dense cloud surrounding the stars and makes them optically visible. This outflow is important because it prevents stars from spinning out of control while they grow. But when exactly these outflows start to happen is an open question in astronomy.

“It is a big puffy sun that is still gathering a lot of mass, but just started its outflow to lose angular momentum to be able to keep growing,” Karnath said. “This is one of the smallest outflows that we have seen, and it supports our theory of what the first step in forming a protostar looks like.” 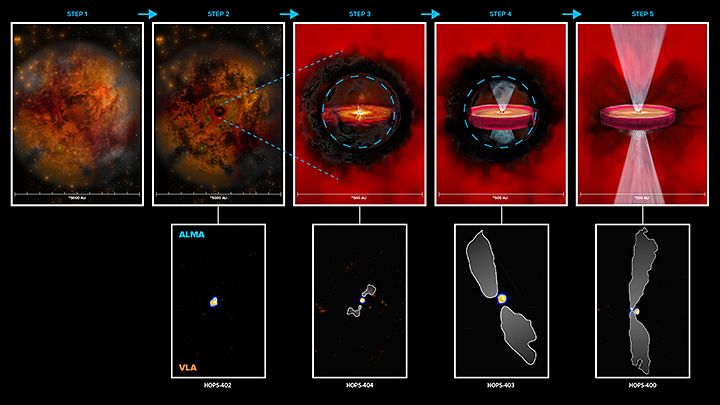 This schematic shows a proposed pathway, top row, for the formation of protostars, based on four very young protostars, bottom row, observed by Very Large Array (orange) and Atacama Large Millimeter/submillimeter Array (ALMA) (blue). Step 1 represents the collapsing fragment of gas and dust. In step 2, an opaque region starts to form in the cloud. In step 3, a hydrostatic core starts to form due to an increase in pressure and temperature, surrounded by a disk-like structure and the beginning of an outflow. Step 4 depicts the formation of a class 0 protostar inside the opaque region, which may have a rotationally supported disk and more well-defined outflows. Step 5 is a typical class 0 protostar with outflows that have broken through the envelope — making it optically visible — an actively accreting, rotationally supported disk. In the bottom row, white contours are the protostar outflows as seen with ALMA. This image is courtesy of ALMA (ESO/NAOJ/NRAO), N. Karnath, and NRAO/AUI/NSF, B. Saxton and S. Dagnello.

Karnath’s stellar work continues in California at the SOFIA Science Center. SOFIA is a flying observatory made out of a modified Boeing 747, capable of making observations that are impossible for even the largest and highest ground-based telescopes.

SOFIA, which stands for Stratospheric Observatory for Infrared Astronomy, is a partnership of NASA and the German Aerospace Center and under contract with the Universities Space Research Association.

As an instrument scientist, Karnath is responsible for one of five instruments rotated on and off the telescope on the plane, depending on the type of data astronomers are looking to gather.

“I work on an instrument called FORCAST. It’s an imaging instrument and also a spectrometer,” Karnath said. “I’m up there making sure we’re getting the filters needed or the different wavelengths, or looking at a certain target for the right amount of time, and also troubleshooting issues.”

Karnath also is using SOFIA to continue her own research. She submitted a proposal and was awarded observation time on SOFIA scheduled for February 2021.

The curiosity and determination that first fueled her journey as a little girl still powers this successful woman in science today.

“My dad was an amateur astronomer who had a telescope and regularly had me looking at Saturn or a meteor shower,” Karnath said. “I thought astronomy was the most fascinating subject I ever studied. In high school I enjoyed physics and learned that you could make a living off of this. I never looked back, and I’m so lucky that I still love it.”

Karnath said she couldn’t have accomplished so much so soon without the support of Megeath, the UToledo astronomy program, and past advisors at Lowell Observatory and Ohio State University.

“The best part of my job is handing over astronomical data from a cutting-edge observatory, such as the Spitzer Space Telescope, Hubble Space Telescope, ALMA, or the Lowell Discovery Telescope, to a graduate student and seeing the discoveries they make from the data. They never know exactly what they will find,” Megeath said.

“In Nicole’s case, she did an extraordinary job working with an international team spanning three continents and involving universities and institutes across the U.S., Chile and Spain. She combined data from two of the most powerful radio telescopes on Earth to discover these objects. The exciting part is that every discovery brings new mysteries to solve.”

Prior to UToledo, Karnath earned a master’s in applied physics from Northern Arizona University and a bachelor’s in physics and astronomy from Ohio State University.

UToledo is a member of the Association of Universities for Research in Astronomy, a prestigious consortium of 47 U.S. institutions and three international affiliates that operates world-class astronomical observatories for the National Science Foundation and NASA.