Three Distinguished University Professors were named in honor of their exemplary career achievements in teaching, research, scholarship and professional service.

The newest faculty members with the honorary title, who were approved and recognized by the Board of Trustees Feb. 10, are:

• Eric Chaffee, professor of law in the College of Law;

• Dr. Mohammad Elahinia, professor and chair of mechanical, industrial and manufacturing engineering in the College of Engineering; and

• Dr. Melinda Reichelt, professor of English in the College of Arts and Letters. 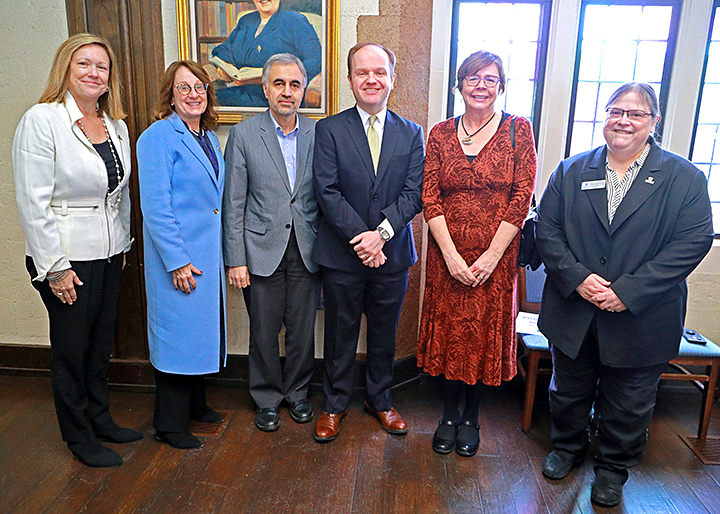 “Being named a Distinguished University Professor is The University of Toledo’s highest permanent honor bestowed upon a faculty member,” said Dr. Karen Bjorkman, provost and executive vice president for academic affairs. “We are proud of these outstanding faculty members who contribute so much in the classroom and in their fields. The impact they have on our students is immense.”

Chaffee joined the University in 2013. He is a nationally recognized scholar of business law and has written extensively about securities regulation, compliance, and the essential nature of the corporate form. He has presented on these topics at prestigious schools, including Harvard University, the University of Chicago and the University of California at Berkeley, and has published in numerous top-tier journals.

He is the co-author of three books, including a forthcoming title published by Cambridge University Press, and he is a founder of the National Business Law Scholars Conference, the premier conference in the business law field. In addition, Chaffee has served as chair of multiple sections of the American Association of Law Schools — positions elected by his peers.

“The Distinguished University Professors that I have encountered during my time at UToledo have all been phenomenal people,” Chaffee said. “I am deeply honored to receive this award. I am very grateful to all of those individuals who have supported me and challenged me to be more during my career, especially my colleagues at the College of Law.”

During his time at the College of Law, Chaffee has received four teaching awards thanks to votes from law students. He also has written and spoken extensively about the importance of incorporating transactional skills into law school curricula.

Elahinia is a global leader in advance manufacturing of shape memory alloys with applications in energy, medical, and mobility applications. He brought his expertise in smart and active materials to UToledo in 2004. During his tenure at the University, he has received more than $13 million in sponsored research funding for 36 projects as principal investigator. Sponsors of his work include the National Science Foundation, the Environmental Protection Agency, the U.S. Army, the U.S. Department of Transportation, and the Ohio Board of Regents.

With his students, Elahinia has authored or co-authored three books, seven book chapters and more than 100 journal articles. These publications have been cited more than 4,700 times. He and his students have presented nearly 280 conference papers. Elahinia has 19 invention disclosures.

“The scholarly success of my group is due to the dedication of my students and research scholars, eight of whom have become professors in other universities around the country,” Elahinia said. “I am honored and humbled by the recognition. Over the years, I have been fortunate to work with a very talented group of students and colleagues inside and outside of the University who have been very supportive. This recognition belongs to them all.”

A strong mentor, Elahinia has supervised nearly 20 visiting scholars and postdoctoral researchers. He received the University’s Faculty Research and Scholarship Award in 2017 and the Outstanding Teacher Award in 2019.

Her research focuses on the role of English and English-language writing instruction around the world, including in Germany, Turkey, Poland, Spain, Cuba and the United States. She co-edited two books, “Foreign Language Writing” and “L2 Writing Beyond English.” Reichelt also has published in various edited collections and prestigious journals, including Composition Studies, Modern Language Journal, World Englishes, Foreign Language Annals, and the Journal of Second Language Writing.

“I am pleased to receive this honor and am grateful to my family, colleagues and students,” Reichelt said.

She has presented her work at conferences in China, Bulgaria, New Zealand, Poland, Portugal, Germany, Cuba, Ukraine and the United States. Her international reputation has led to delivering keynote addresses at several global conferences. Reichelt has received two Fulbright Scholar awards, and she serves on the editorial board of the Journal of Second Language Writing.