A group of innovative University of Toledo students has taken the Redbox video kiosk idea and turned it green.

The project is attracting national attention and federal research money.

The U.S. Environmental Protection Agency awarded the team of UT undergraduate students a $15,000 grant to participate in a national competition to design solutions for a sustainable future. 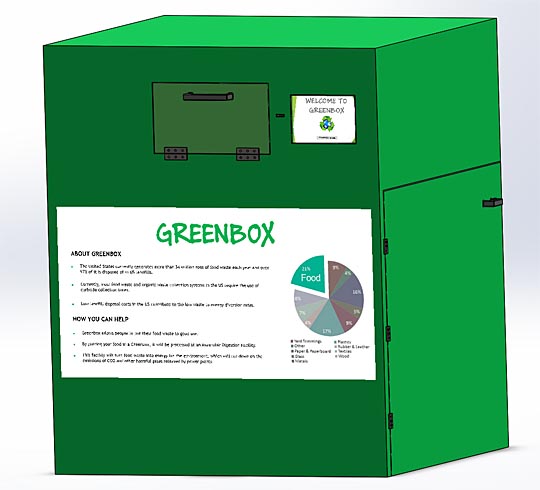 UT students are building the Greenbox prototype for food recycling this semester.

The UT team’s proposal is to create a community-based garbage collection system called Greenbox, which turns food waste into energy.

To understand the senior design project, it helps to be familiar with the Redbox video rental system.

“Instead of getting movies or video games on disc at an automated machine, you can drop off a three-gallon bag of food waste at a Greenbox kiosk and rack up reward points for gift cards or other perks,” John Martillotta, UT senior majoring in mechanical engineering, said. “It’s a new way to recycle that has not been done before.”

“If you’re not looking to compost, our system would be a good way to collect and store food scraps from households and restaurants and use it to generate energy in the form of methane gas or create fertilizers,” Dr. Matthew Franchetti, UT associate professor of mechanical, industrial and manufacturing engineering, said. “The garbage bags would be transported from the kiosks throughout the community to a large-scale anaerobic digestion facility.”

The EPA chose the UT team to compete with more than 30 other university student teams across the country in the 12th Annual People, Prosperity and the Planet Student Design Competition.

In the spring, all teams will submit their reports and proposals for a chance to receive an additional $75,000 in grant funding for their project.

“This year’s [People, Prosperity and the Planet] teams have created innovative research projects that tackle some of our most pressing environmental and public health challenges,” said Dr. Thomas A. Burke, science adviser and deputy assistant administrator of the EPA’s Office of Research and Development. “These students have the opportunity to bring their exciting new ideas for innovation in sustainability to life by expanding their learning experience beyond the classroom.”

The United States generates more than 34 million tons of food waste each year, and more than 97 percent is disposed of at landfills, according to Franchetti.

Greenbox would be a recycling option with reward incentives to divert food waste from the landfill.

“Greenbox also would reduce the greenhouse gas emissions associated with food waste rotting in landfills and lead to a cleaner environment,” Franchetti said.

Somewhat similar to the U.S. Postal Service automated centers, the Greenbox kiosks would include a touch screen and label printer. Once a kiosk is two-thirds full of food waste bags, a sensor would automatically notify a local hauler that the machine needs to be emptied. The bags would then be transported to a local waste-to-energy facility and weighed so customers could cash in on recycling incentives.

“Last semester, we developed the design and built the business plan. It would be a franchise like Redbox,” Martillotta said. “This semester, we are building the Greenbox prototype. Our project is relevant on a large scale. If it keeps moving forward, we could have a positive impact on preventing pollution across our country. The byproducts of food waste are awesome. We’re just trying to find a good way to do it.”