Second-year law student Damon Williams made history as he was selected to be the next leader of The University of Toledo Law Review.

Williams will be the first black student to hold the prestigious position of editor-in-chief in the publication’s 52-year history when his term begins later this year. 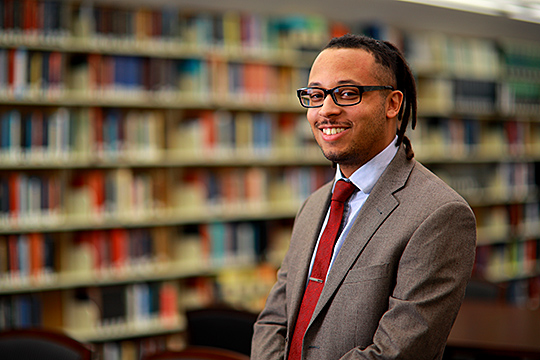 “I am extremely grateful for the opportunity that I have been afforded,” Williams said. “Becoming the first editor-in-chief with African-American heritage is an amazing milestone, and I am beyond honored.”

The law review, which was first published at the UToledo College of Law in 1969, is a student-run journal written by law professors, judges and students.

“I am delighted that Damon was selected as editor-in-chief of The University of Toledo Law Review,” D. Benjamin Barros, dean of the College of Law, said. “He’s exceptionally bright and will be an excellent leader. Although we wish this milestone would have happened sooner, his selection is encouraging as it reflects progress.”

“This is but a step in what I hope to be a continuing process for The University of Toledo,” Williams said. “I am striving to help foster subsequent diversity milestones and continued Law Review success, and I look forward to my future collaboration with community members.”

Law Review members are selected as editor-in-chief after a highly competitive, in-depth interview process. The elections committee considers academic performance, writing ability as demonstrated by their academic writing and editing throughout the year, and leadership potential.

“From a technical perspective, Damon’s formal yet graceful writing style and his superior academic performance made him a competitive candidate among his peers,” said Lindsey Self, law student and the current editor-in-chief of The University of Toledo Law Review. “He demonstrates conviction in his vision for the journal but is unafraid to take calculated risks. Damon’s writing and leadership demonstrate a unique balance between sensibility and practicality with inventiveness and ingenuity — a balance that is difficult to find in practice, let alone law school.”

Williams, who also serves as president of the Black Law Students Association, was born and raised in Toledo. He earned his bachelor’s degree in criminal justice and master’s degree in forensic science at Bowling Green State University.

He hopes his law degree will help him facilitate the social and political changes he wants to see in the world. Although he is still figuring out his next steps, Williams is considering a federal clerkship or doctor of juridical science.

“This is much bigger than me alone,” Williams said. “I have a fantastic executive board in Hayley Mise, Cameron Morrissey, Kate Murray and Morgan Isenberg. Their continued excellence and support are essential to the success of the Law Review. In addition, Lindsey Self has been a shining north star, guiding me toward the path to success.”