The Toledo football team partnered with the Art Tatum Zone, the Toledo Museum of Art and Martin Luther King Jr. Academy for Boys for a tour of the museum’s special armor exhibit on Friday.

Twenty Rockets met the grade-school boys at the school, then traveled to the Toledo Museum of Art to experience the “Age of Armor: Treasures from the Higgins Armory Collection at the Worcester Museum” exhibition and engage in hands-on art projects. 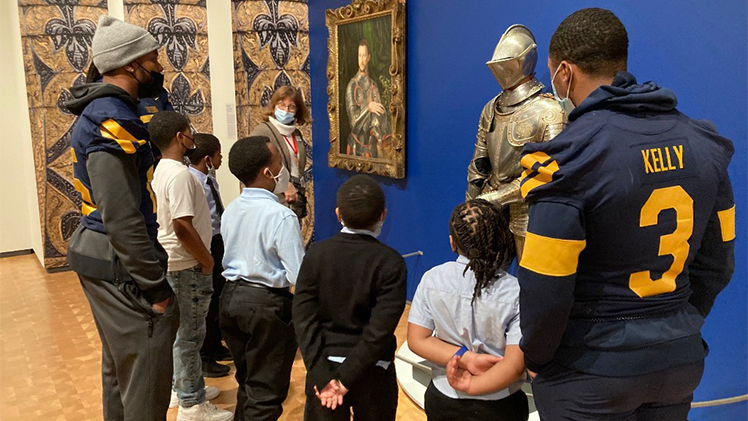 A group of 20 Rocket football players visited the Toledo Museum of Art on Friday along with students from Martin Luther King Jr. Academy for Boys.

The group also went to the Museum’s Little Theater, where the players shared with the students the importance of putting on their “armor” (football uniform and equipment) to face battles on the field and in the classroom.

The event concluded with a lunch at the MLK Academy.

Each football player was paired with an MLK Academy student for the tour, and will continue to serve in a mentoring capacity with his match in the future. A handful of players will go to the school at lunchtime each Friday for a “chat and chew” to talk about goal-setting and what it takes to be a student-athlete.

“This will be a great mentoring opportunity for the football players to give back and influence the lives of young men in our community,” Sweeney said.

Senior linebacker Dyontae Johnson said the experience was just as meaningful for himself and his teammates as it was for the young students.

“When I was a kid, I was just looking for an opportunity like this, to get to know older guys and have fun with them like we did today,” Johnson said. “I know the kids had a lot of fun today and so did we.”