Mark Beier, the longtime radio play-by-play voice of Toledo Rockets football and men’s basketball, announced today that following the conclusion of this basketball season, he will step down in his role behind the UT microphone.

Beier, 63, is in his 20th season calling the action for the men’s basketball team; he recently finished his 21st season calling Rocket football games. 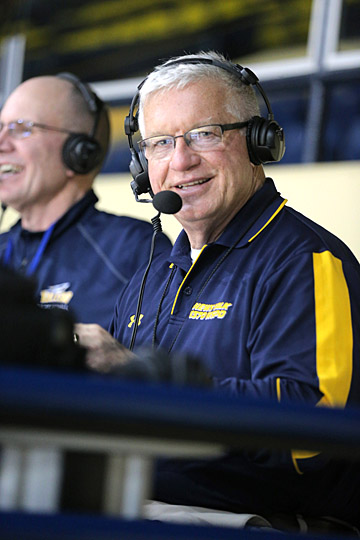 “This was not an easy decision. I have truly loved calling Rocket football and men’s basketball,” Beier said. “But I think 21 years is a pretty long time to do anything. I just felt at this point in my life I wanted to spend more time with my wife and less time away from home.

“I’ve had so many incredible memories and have worked with so many great people at UT. It would be impossible to thank everybody. But I do want to make special mention of (former associate athletic director) Mike Karabin, who hired me back in 1995 and always advocated for me. Paul Helgren, who has been the sports information director at UT for almost as long as I’ve been calling the games, has been a great friend and ally. I’d also like to thank (UT Vice President and Athletic Director) Mike O’Brien, who has always been very supportive of me over the past 14 years. I told Mike that I’m not going anywhere. I plan on being a season ticket holder and coming to as many of the games as possible.”

O’Brien called Beier “one of the truly great college sports announcers in the country. Rocket fans have been very fortunate to have a true professional like Mark Beier calling the action for football and men’s basketball games these past 21 years. In my opinion, Mark could easily have been calling games in the NFL or NBA; he’s that good. But we were fortunate to have him for as long as we did. He truly has been the ‘Voice of the Rockets.’ He will be a very tough act to follow.”

The University will honor Beier in a brief ceremony before the men’s basketball regular-season finale vs. Eastern Michigan Friday, March 4, in Savage Arena. It will be his 606th game as the Rockets’ play-by-play man.

In addition to calling play-by-play for the Rockets, Beier has hosted the “UT Coach’s Show” for football and men’s basketball on the Rocket Radio Network since 1995. He also hosted “Rocket Replay,” a 30-minute coach’s highlight television show from 1995 to 2001. He is the voice of “The Rocket Insider,” a 90-second news vignette that runs on WTVG-TV, and has served as emcee for countless football, basketball and Varsity ‘T’ Hall of Fame banquets. In 2014, Beier was honored by the Varsity ‘T’ Club with the Distinguished Service Award for his efforts on behalf of the Rockets.

Throughout his storied broadcasting career, Beier has not only been an integral member of the Toledo Rocket Sports Radio Network team, but of the Learfield family. Learfield’s Rocket Sports Properties is the multimedia rights holder for Toledo Athletics and oversees all aspects of the radio network including talent and affiliate partners.

Beier is perhaps best known for his trademark call, “Touchdown R-r-r-r-r-r-r-ockets!” He began his journey with UT in the 1995 football season, a year that saw star running back Wasean Tait power Toledo to an 11-0-1 season and a victory in the Las Vegas Bowl. A year later, he also assumed the play-by-play role for men’s basketball.

Beier was born in England, where his father, David, served in the U.S. Air Force. At 10 months of age, Beier sailed to the United States with his mother, Mollie, to join David after he completed his tour of duty. The family settled in Sandusky, Ohio. David Beier died in 1994, one year before his son started calling Toledo games. Mollie Beier passed away in 2014.

Following a stint in the U.S. Navy, Beier began a career in broadcasting, working at WION in Ionia, Mich., in 1978. From there, he moved to WLKR in Norwalk, Ohio, where he worked from 1979 to 1984. Beier then moved on to WLIO-TV in Lima as a weekend sports anchor and later as a news anchor from 1985 to 1988. From 1988 to 1996, he worked as a general assignment reporter at WTVG-TV in Toledo. Beier also worked from 1996 to 2001 as a general assignment reporter at WKBD-TV in Detroit.

In 2001, Beier moved to the business side of broadcasting, taking a job in sales with Clear Channel Toledo (now Iheart Radio). He retired from the business in 2014.

Beier and his wife, Debra, have been married for 35 years. They have two sons, Matthew and Nathan.