Alain Bezing moved to the United States in 2014 from a small country in western Africa, where he was a general practitioner and head of a small clinic. His goal was to attend medical school in the U.S. to specialize in internal medicine, but his plans were put on hold due to family, health and legal restrictions.

“All I want to do is practice medicine,” Bezing said. “That’s all I have ever wanted.” 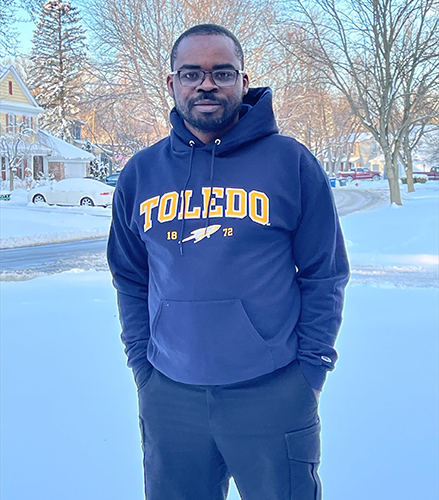 Now a senior at UToledo, Alain Bezing moved to the United States in 2014 from a small country in western Africa, where he was a general practitioner and head of a small clinic.

Bezing is a senior at The University of Toledo hoping that his plans for advanced degrees in bioengineering give him a competitive edge to practice medicine in America. After earning his bachelor’s degree in 2023, he plans to apply to UToledo’s master’s program in bioengineering and then pursue a doctoral degree in biomedical science.

Bezing is currently working with the Educational Commission for Foreign Medical Graduates (ECFMG), which assesses the readiness of international medical graduates to enter residency or fellowship programs in the United States.

He has completed the first of three steps in that process. Once Bezing successfully completes the remaining two, he’ll be eligible to apply to a medical residency program, bringing him one step closer to his dream.

“I know I’m an underdog,” Bezing said. “I’m trying to add more to my application so when I present myself, I’ll not only be ECFMG certified, but I’ll also have a Ph.D. My hope is that will convince them they can bet on me.”

Bezing, who became a U.S. resident in 2017, said practicing medicine in the United States was always a part of his plan, but he acknowledged feeling lost at times, unsure if it was a viable option anymore.

“I think I got to a point and realized I’m not young anymore. I haven’t practiced in a while,” Bezing said. “I had given up on my education and decided to just get a job and move on.”

But not long after he made that decision, his daughter, Brielle, was born, and his perspective changed.

“If I set my expectations low, my kids might not dream big,” he said.

“He is one of the hardest working, sincere and detail-oriented students in the lab,” she said.

In addition to attending UToledo, Alain works full time as a corrections counselor at the Lucas County Corrections Center. He owns a medical digitalization company, Brilydal Ltd., that helps startups and enterprises with their digital transformation needs, and he is working on a platform called MySelf that he expects to release later this year.

“It sounds like I’m doing a million things,” Bezing said, “but to me, everything has a place.”