Growing up in Sri Lanka, Vimantha Bamunuarachchi was full of curiosity. How are medicines made? How do they work in the body?

He dreamed of becoming an engineer and making the world a better place.

Now he has his chance.

In December, Bamunuarachchi graduated from The University of Toledo with a bachelor’s degree in chemical engineering. Shortly afterward, he headed to Boston to work as an analytical development engineer for Moderna, one of the three pharmaceutical companies whose COVID-19 vaccine was granted emergency use authorization by the Food and Drug Administration. 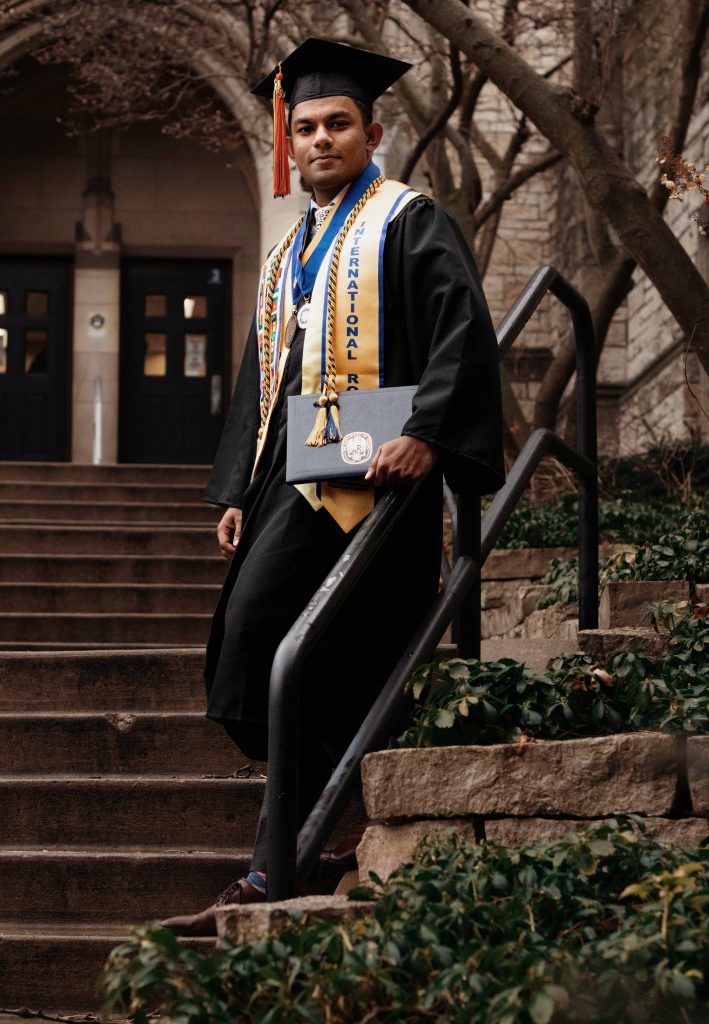 Vimantha Bamunuarachchi said UToledo’s career fairs, required co-ops, undergraduate research opportunities and professional education were key to his success, as were “star friends” at the University who pushed him to do better.

“It’s unbelievable. I can’t think of doing anything better at this time,” Bamunuarachchi said. “Everyone here is amazingly passionate and trying to push the boundaries of science. I’m proud to be a part of this journey to save the world.”

From the time he was a young student, Bamunuarachchi had big ambitions. Attending college in the United States was one of them. He credits his parents with letting him spread his wings. He is fiercely independent and wanted to succeed on his own.

“Mom made so many sacrifices for me. She quit her job to raise me and to get me the education no one had in my family. She never doubted my abilities,” Bamunuarachchi said. “My parents never forced me into one field. If I wanted to be a singer, they would have supported me.”

While his parents supported him at home, the first-generation student found an equally supportive network on campus and at his co-op sites.

“I’m so glad I picked UToledo,” Bamunuarachchi said. “It has an amazing co-op program, and [faculty and staff] always pushed us to find the best opportunities out there. UToledo helped make my dreams a reality.”

From his first semester on campus, Bamunuarachchi sought out chances to build his skills and knowledge.

“I joined a research program as a freshman,” he said. “When I first walked into the lab, I had no clue.”

But it didn’t take him long to befriend the graduate students in the lab and learn from them. He joined another lab and found a mentor in Dr. Ana Alba-Rubio, who was conducting research on sustainable and green energy.

“Vimantha was a highly motivated and determined student,” Alba-Rubio said. “He was learning and pushing hard in the lab while looking for the next co-op. He always dreams big and will achieve whatever he wants.”

Bamunuarachchi also found part-time jobs on campus as a building manager at the Thompson Student Union and as a math tutor.

“I was really quiet as a freshman. The part-time jobs helped me improve communication skills,” he said.
“When I went to my first career fair as a sophomore, I had the soft skills to answer the behavioral interview questions and the technical skills because of research.”

The job experiences, coupled with his leadership and impressive research experience, caught the eyes of recruiters from AstraZeneca, a leading pharmaceutical company. But they also were impressed by something else, said Anh Boester, interim validation manager at AstraZeneca.

“What struck us was his level of excitement and passion for research and science,” she said.

Bamunuarachchi was the first UToledo engineering student to intern at AstraZeneca and the first company intern to be named one of three Future Scientists scholarship recipients in the U.S. by Kelly Services.

Boester worked directly with Bamunuarachchi in his third co-op at AstraZeneca, where he continued to impress her with his work ethic and professionalism.

“I wanted him to join me on a project. The part I was testing was completely new to him,” she said. “He asked intelligent questions and patiently worked through the problem with me. He was 100% in, even though he had to work extra hours that day to complete another project.”

Throughout his UToledo career, Bamunuarachchi did five research and industrial internships, including three for AstraZeneca, his introduction to pharmaceuticals.

During his second co-op, he posted an article on LinkedIn: How to get the best out of engineering school: A proven strategic approach. He shared tips on why it is important to take advantage of all the opportunities you’re offered.

At UToledo, he said the career fairs, required co-ops, undergraduate research opportunities and professional education were key to his success. He also recommends finding your “star friends,” like those he found at UToledo who pushed him to do better.

Ibeh Omodolor, a UToledo Ph.D. candidate, worked with Bamunuarachchi in Alba-Rubio’s lab. He became a mentor and friend, and the pair traveled to conferences together to present research.

“[Vimantha] was always willing to learn and help others,” Omodolor said. “He’s a good ambassador of the department, and I see him rising to the highest level in any company where he finds himself.”

In the end, Bamunuarachchi was the arbiter of his own success, just as he told his parents he wanted to be.