Artistic creativity is inspired in ways that are often beyond our senses.

Donna Beauregard, a senior fine arts major at The University of Toledo, found her inspiration after traipsing through her childhood memories.

Beauregard is working on a children’s mural in what will be a family room on the second floor of Carlson Library this fall. In order to paint for children, she decided to think like the children.

“I had to put myself back into the shoes of my younger self — which is always fun — and really ask, ‘What would be visually exciting?’ I also knew that I wanted to make this a fun, vibrant and graphic image. Thinking in this way I came upon the fantastical idea of larger-than-life balloon animals being carried away by other balloons,” Beauregard said. 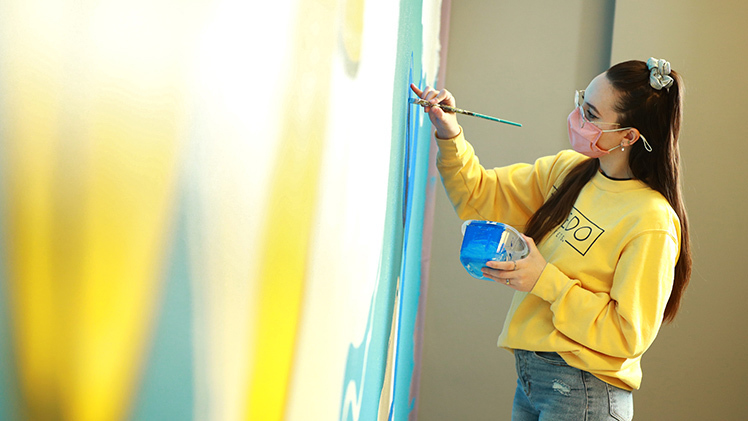 Donna Beauregard, a senior in the College of Arts and Letters, paints a mural on March 5 on the second floor of Carlson Library. She started the mural at the beginning of spring semester and will finish it by semester’s end.

“I chose to make the balloon animals in the primary colors and the other balloons in the secondary colors: through doing this I hope there can be wholesome teaching moments.”

Working solo, Beauregard began the children’s mural at the beginning of spring semester and will be finished with it by semester’s end.

This is her second mural in Carlson Library. She collaborated on a cityscape mural on the second floor that focused on piecing and bringing together what are usually separate buildings in the Toledo area.

Beauregard said that her personal work tends to focus on her fascination with “abstracted vortex-like compositions and forms that are inspired by things we consider to be imperfections.”

That makes the children’s mural all the more fun for her as an artist.

“The process has been great,” she said. “Creating something that is for an audience of children is a refreshing change compared to what I typically do.”

Beauregard is the latest student-artist in the library’s experiential learning initiative.

Launched a few years ago, the initiative has brought in fine art majors to restore a large globe that was in disrepair and to create murals throughout the library, such as the two-sided clock-tower mural near the library’s circulation desk and the second-floor murals.

“Part of the experience in this learning program is to give students an opportunity to take those skills they learn in class and to build upon them, all while getting paid and creating art that can be enjoyed by the entire UT community,” said David Remaklus, director of operations for University Libraries.

The new children’s mural will be part of a specially designed space for families with children’s books and activities that will open in fall semester.

“We’ve noticed there are a lot of students in the library who have their kids in tow,” he said. “And just as the student body is changing, I thought it would be really neat to have a space where parents could meet with groups or who just need to come in and study and have a space where they can be with their children and there would be resources for their kids.”