Junior forward Setric Millner scored 17 of his 22 points in the second half as Toledo rallied to pull out a 72-71 victory over Central Michigan in quarterfinal action of the Mid-American Conference Men’s Basketball Tournament at Rocket Mortgage Fieldhouse in Cleveland on Thursday. 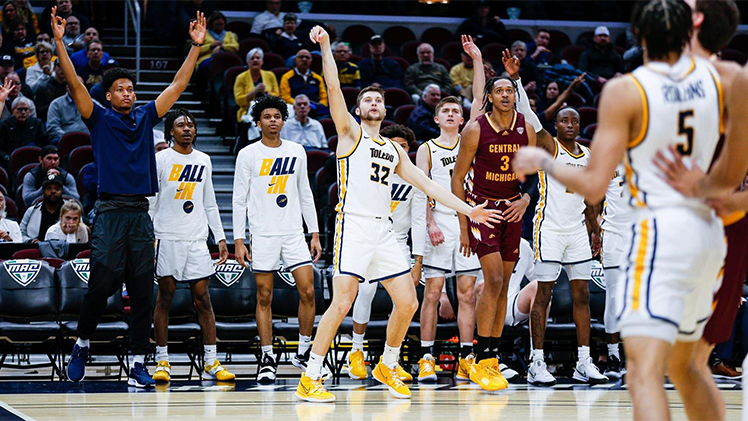 “I’m proud of our team and how we didn’t panic,” Head Coach Tod Kowalczyk said. “Central Michigan is a talented team and came up just short against Akron, Kent State and us in the last three weeks. I thought we moved the ball well and took good shots. They just weren’t falling in the first half and in the second half they did.”

The highest-scoring team in the MAC this season, the Rockets (26-6) won this game with a big defensive play by junior forward JT Shumate, who forced a critical turnover on an inbounds play with 10.1 seconds remaining and the Rockets holding a one-point lead.

“That was JT making a basketball play,” said Kowlaczyk. “It’s a play that an all-league player makes. Our goal was just to slow them up, not to go for the steal, but he saw an opportunity and went for it. It was a big-time play.”

Toledo then took the ball out of bounds, and sophomore guard Ryan Rollins was fouled. He missed the front end of a one-and-one, and CMU grabbed the rebound and moved the ball up the floor for the final shot. Harrison Henderson was forced into a difficult three-point attempt that hit the backboard. Junior guard RayJ Dennis secured the rebound to seal the victory.

Trailing 32-20 at the break, the Rockets slowly pulled away from the Chippewas in the second half, pushing the lead to seven points, 68-61, with 3:33 left to play. But CMU outscored the Rockets 10-4 in the final two-plus minutes, taking a 71-70 lead on a Harrison dunk with 20 seconds left. Toledo re-took the lead, 72-71, on a driving layup by Dennis with 10 seconds to play and the Rockets’ defense did the rest.

Toledo now advances to the semifinals against the winner of the Buffalo-Akron game. Tipoff time for the contest is set for 5 p.m. on the CBS Sports Network.

“We’re playing tomorrow,” said Kowalczyk. “You can’t win them all until you win the first.”