Several people told Tatiana Baliu-Souza that pursuing an advanced degree in biology wasn’t practical. They warned of the challenging path ahead for someone with a bachelor’s degree in marketing and no experience in the sciences.

“I made many phone calls and contacted numerous people at different institutions,” she said. “Most of the professors and advisors were very realistic. They told me it would be difficult for me to change careers so drastically.” 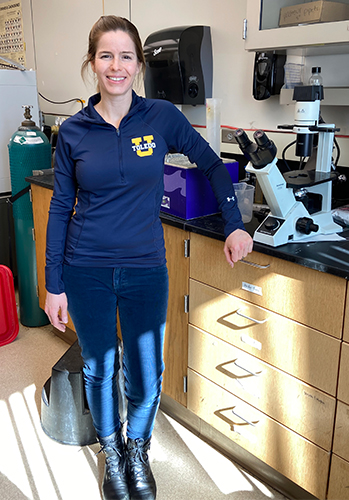 Then Baliu-Souza connected with Dr. Tomer Avidor-Reiss, professor of biological sciences in The University of Toledo’s College of Natural Sciences and Mathematics.

“He opened up doors for me,” Baliu-Souza said. “He told me it’s not going to be easy, but if you’re willing to do the hard work, then let’s try it. That’s why I chose UToledo.”

Baliu-Souza, 42, is currently taking undergraduate biology classes through an independent study plan Avidor-Reiss, along with her advisor Beth Denzel, put together for her to build the knowledge needed to pursue a graduate degree in biology. Her goal is to apply to UToledo’s doctoral degree in cellular and molecular biology in early 2023.

“Tatiana is a determined person who made the brave and challenging decision to switch directions in her professional life,” Avidor-Reiss said. “She knows her strengths and weaknesses and is unafraid to ask questions and for advice, all critical to making such a transition.”

Baliu-Souza arrived at this crossroads in life after moving back to Toledo from her native Brazil in 2017 with her young son, Gabriel. She sought the support of her family after her son, then one-and-a-half years old, was diagnosed with autism.

Baliu-Souza had been living in Brazil since 2003, working as a Portuguese-English simultaneous interpreter.

“I needed to start working again, and there is no demand for interpreting here, much less in Portuguese,” she said. “I basically realized I was going to have to start from scratch, whatever I did.”

Baliu-Souza’s brother, Dr. David Baliu-Rodriguez, a UToledo alumnus, played a part in her decision to pursue a biology degree. At the time, he was pursuing a Ph.D. in chemistry and working in Dr. Dragan Isailovic’s lab. He’s now a postdoctoral researcher in the Lawrence Livermore National Laboratory in California.

“My brother told me about all the lab work he did, and I found it really fascinating,” she said. “I’m excited to make new discoveries. I love to ask questions and find creative solutions to try to answer those questions. I love brainstorming and all the creative processes involved in lab work.”

For the last year, Baliu-Souza has been performing research in Avidor-Reiss’ lab on a new method to identify infertility in men. The technique pinpoints sperm with defective centrioles, which are subcellular structures in the sperm believed to play a role in sperm quality. The research aims to determine the correlation between defective sperm centrioles and unexplained infertility.

“Of the roughly 10% of couples who experience infertility, approximately one-third can’t get pregnant and doctors don’t know what’s wrong,” Baliu-Souza said. “Most treatments are focused on the woman and sometimes there’s nothing wrong with her. We want to help that one-third.”

Baliu-Souza is co-authoring a paper on the subject.

“It became evident that she is very meticulous and has the patience to do the careful analysis needed in science,” Avidor-Reiss said. “She is also an excellent teacher and is training new undergrads in the lab in performing the same analysis she did. I think she is a perfect example of a person who takes charge of their life, and UToledo has been an excellent environment for kickstarting her newfound career in science.”

Baliu-Souza said she hopes to continue working in Avidor-Reiss’ lab as a graduate student at UToledo.