The Carol Eckman Integrity in Coaching Award is named in honor of the late Carol Eckman, the former West Chester State College coach who is considered the “Mother of the Women’s Collegiate Basketball Championship.” 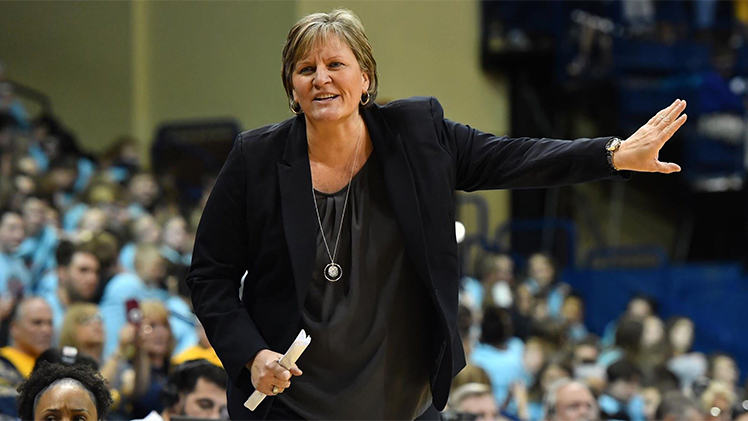 In Tricia Cullop’s 14 seasons at the helm of the Toledo women’s basketball program, the Rockets have won a 2011 Postseason WNIT championship, one Mid-American Conference Championship and three MAC regular-season championships.

Eckman organized and conducted the first women’s basketball championship in 1969 at West Chester State (now known as West Chester University), and she continued to garner recognition and support for the women’s game until her death from cancer in 1985.

The WBCA presents the award annually to an active member coach who exemplifies Eckman’s spirit, integrity and character through sportsmanship, commitment to the student-athlete, honesty, ethical behavior, courage and dedication to purpose.

“I am deeply honored to receive an award that bears the name of one of the trailblazers in women’s basketball, Carol Eckman. We all owe her a lot of gratitude for her work to expand and improve our game,” Cullop said. “I am truly humbled to have my name included on a long list of talented past recipients who I greatly admire.

“I have been blessed to be surrounded by talented players, gifted assistants, and supportive administrators during my coaching career. I also had some incredible coaches growing up who positively impacted my life on and off the court and inspired me to join this amazing profession. My hope is that I am able to pay that gift forward. Thank you WBCA for choosing me for the Carol Eckman Integrity in Coaching Award.”

In Cullop’s 14 seasons at the helm of the Toledo women’s basketball program, the Rockets have won a 2011 Postseason WNIT championship, one Mid-American Conference Championship and three MAC regular-season championships. The four-time MAC Coach of the Year has also amassed an impressive 293-156 overall record and a 161-85 conference mark at Toledo. Individually, 13 Rockets have earned All-MAC honors on 30 occasions.

Since arriving at Toledo, Cullop also has helped cultivate one of the most impressive college basketball fan bases in the country. The Rockets have led the Mid-American Conference in attendance in each of her 14 seasons and they have ranked in the top 30 nationally in 10 of the past 11 years in average attendance.

“The WBCA is honored to recognize Tricia Cullop with the Carol Eckman Integrity in Coaching Award,” said WBCA Executive Director Danielle Donehew. “Tricia was an extraordinary leader at an unprecedented time in our game’s history. As our ‘pandemic president,’ she was steady and committed to her peers. She stayed positive, nimble and adapted to whatever was needed at the time. Tricia has always been trusted and deeply respected by her peers. Her service as president during this most challenging time has deepened everyone’s respect for her enormous talent, skill, heart and dedication.  The WBCA salutes her many contributions and leadership to protect the association.”

The Rockets also have been successful in the classroom under Cullop. In her tenure, 24 Toledo players have been selected Academic All-MAC on 40 occasions and a total of 40 players have made the University’s Dean’s List (3.5 GPA or higher) on 134 occasions. Under Cullop’s tutelage, Toledo has posted a team grade point average above 3.0 in each of the last 22 semesters.

Off the court, the Rockets have been active in the Toledo community, helping with projects such as Connecting Kids to Meals, Habitat for Humanity, Ovarian Cancer Walk, the Susan G. Komen for the Cure and Sponsor a Family for Christmas. Under Cullop, Toledo’s women’s basketball program has raised more than $157,000 for cancer research since 2010.

Cullop is equally dedicated to her fellow women’s basketball coaches. She served as president of the WBCA during the 2019-20 and 2020-21 academic years, providing invaluable leadership to the association through the COVID-19 pandemic. Cullop continues to serve on the WBCA Board of Directors as the association’s immediate past president.

The Carol Eckman Award was first presented in 1985. To see a list of past recipients, visit www.wbca.org/recognize/.