Hypertension affects nearly half of U.S. adults, making it one of the most common chronic conditions in America.

Despite its pervasiveness, however, the root cause of high blood pressure remains largely unknown — meaning available medications largely mask the problem rather than curing it.

“We can treat hypertension with a cocktail of drugs, which work to lower blood pressure, but we still don’t know why most people have high blood pressure in the first place,” said Dr. Camilla Ferreira Wenceslau, assistant professor in the Department of Physiology and Pharmacology at The University of Toledo College of Medicine and Life Sciences. “If we know the cause, we might be able to actually stop the disease.” 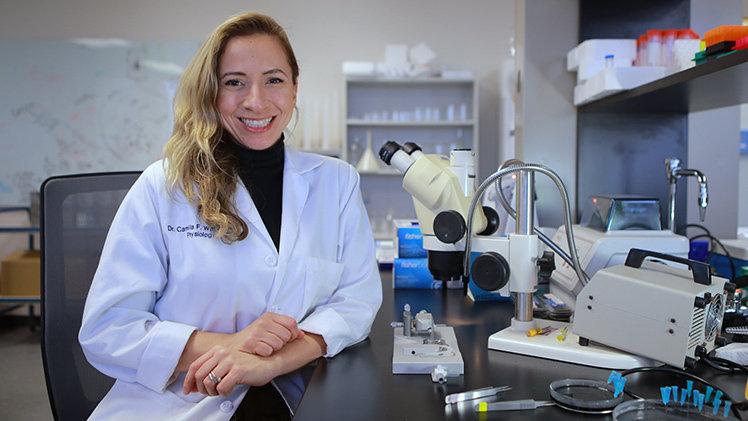 With the support of a five-year, $1.9 million grant from the National Heart, Lung and Blood Institute of the National Institutes of Health, Dr. Camilla Ferreira Wenceslau is investigating how immune receptors tucked within our arterial walls might be pivotal in causing high blood pressure.

With the support of a five-year, $1.9 million grant from the National Heart, Lung and Blood Institute of the National Institutes of Health, Wenceslau is investigating how immune receptors tucked within our arterial walls might be pivotal in causing what scientists call vascular remodeling.

Everyone with hypertension experiences vascular remodeling, a process in which artery walls undergo significant changes. Those changes can lead to arteries becoming stiffer and, ultimately, high blood pressure.

Prior research from her lab has found that in addition to recognizing and responding to bacteria present in the blood, those specific arterial immune receptors also react to mitochondria released through normally occurring cell death in the body.

Though the mitochondrial particles are not harmful, they look to the immune receptors as if they could be. Over time, the damage from that low-grade, chronic inflammation may be stiffening arteries and leading to hypertension.

In turn, hypertension can cause bacteria present in the gut to leak out into other parts of the body, including the bloodstream.

While the level of bacteria isn’t enough to make an individual sick, Wenceslau said it is enough to again activate the immune receptors, causing additional arterial damage and making hypertension worse.

“It’s a synergetic effect,” she said. “By understanding the mechanism that leads to this immune response in arteries, we might be able to target new therapeutics to actually prevent or cure hypertension.”