University of Toledo Women’s Golf Head Coach Nicole Hollingsworth has signed a contract that will keep her at the Rockets’ helm through the 2018-19 season, Vice President and Athletic Director Mike O’Brien announced yesterday.

“Nicole has done a remarkable job in building our women’s golf program into one of the best in the Mid-American Conference,” O’Brien said. “While her teams have been successful year in and year out on the course and in the classroom, her student-athletes have also been extremely active in giving back to the Toledo community. We’re committed to Nicole as she strives for greater success and look forward to her leading our program for many years to come.” 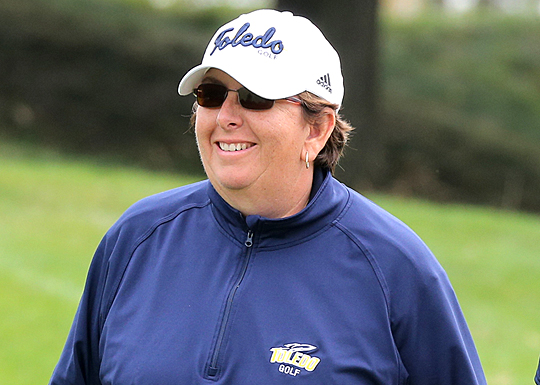 “I would like to thank Mike and President (Sharon) Gaber for this contract extension and their continued support of the Toledo women’s golf program,” said Hollingsworth, who received MAC Coach of the Year honors following the 2013-14 campaign. “I’ve enjoyed building our program to where it is and am excited to see what our future holds. The support from our administration and the facilities we offer at Toledo have played an enormous role in what we’ve accomplished, and I’m blessed to be a part of this tremendous institution.”

Hollingsworth has developed the Rockets into one of the top programs in the MAC since assuming the reins as the initial full-time head coach in 2003. The Clinton, Ind., native has guided the Rockets to 27 tournament and 13 individual titles during her tenure. More importantly, UT has finished in the top half of the MAC in nine of 12 Hollingsworth’s seasons at the helm. The last four years at the conference championships, the Rockets have taken their play to a higher level with a runner-up showing in 2014, a second-place tie in 2013, and a third-place showing in 2012 and 2015.

During Hollingsworth’s tenure as head coach, a Toledo golfer has received first-team All-MAC accolades on six occasions with senior Sathika Ruenreong (2013, 2014 and 2015) being the first Rocket to earn the award more than once. UT also has had eight second-team All-MAC recipients on 12 different occasions.

Toledo already has tied its school record with four tournament titles this season and is on pace to set a school record for lowest stroke average for the second time in the last three years with a 298.9 mark in its seven tournaments. The Rockets posted their best average ever with a figure of 302.1 in the 2013-14 campaign.

Hollingsworth’s squads also have excelled in the classroom, registering team GPAs above 3.0 in all but one semester. Women’s golf has posted the athletic department’s highest GPA on three occasions, a 3.651 mark in fall 2009, a 3.625 in fall 2013, and a school-record 3.714 measure this past fall.