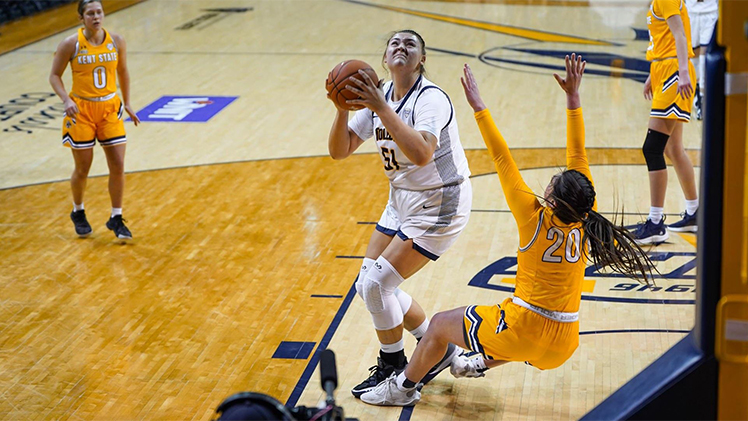 Toledo shot 55.8 percent from the floor to cruise to a 79-59 win over Kent State in the second round of the WNIT at Savage Arena on Monday night.

The Toledo women’s basketball team shot a scintillating 55.8 percent from the floor to cruise to a 79-59 win over Kent State in the second round of the WNIT at Savage Arena on Monday night.

The Rockets (28-5) outscored the Golden Flashes (19-12) 20-9 in the second quarter to take a 15-point lead into halftime and didn’t look back. Kent’s last gasp came in the form of a 12-3 run to end the third quarter that cut Toledo’s lead to 10 points, 57-47. UToledo answered with 11 straight points to open the fourth quarter that all but sealed the deal.

“I’m really proud of our players, we beat a really good team tonight,” head coach Tricia Cullop said. “I’m proud of our defensive effort tonight and the way we slowed down one of the best shooting teams in our league. When Kent State cut the lead to 10 points at the end of the third quarter, things could have gotten a little dicey. But I think you saw the composure that this team has showed all season. They’re not afraid and they won’t back down.

“Any time we take care of the basketball, make our free throws and outrebound the opponent we’ve been very successful, and we did that tonight.”

Junior Quinesha Lockett led the way offensively with a game-high 25 points on 8-of-13 shooting. Nineteen of her 25 points came in the second half. Lockett now has 510 field goal attempts this season, breaking the previous single-season school record of 508 set by Kim Knuth in 1998-99.

Monday’s game marked the sixth time this season that Toledo shot at least 50 percent from the floor. The Rockets connected on 29-of-52 shots and held the Golden Flashes to 35.5 percent shooting (22-for-62).

Lindsey Thall led Kent with 11 points and both Nila Blackford and Katie Shumate contributed 10 points each.