Whether singing African-American blues or looking at a sculpture of bicycle wheels and a piano, this month’s Humanities Happy Hour has something for everyone. 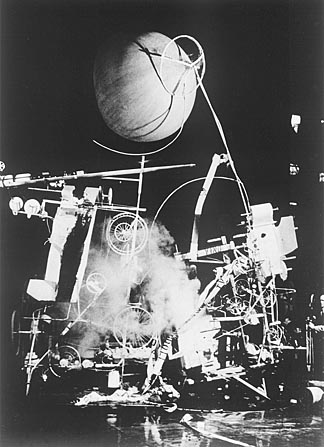 “Homage to New York” was created in 1960 by Jean Tinguely.

Lundquist’s presentation, “Things Seen Are Things as Seen: Wallace Stevens and the Visual Arts,” will focus on “The Man on the Dump,” a piece by modernist poet Wallace Stevens, and work of Swiss sculptor Jean Tinguely, particularly his “Homage to New York,” made from materials gathered from a dump.

“Poetry is a vital and essential art; attention to language and how it works helps people understand and analyze their inner and outer worlds,” she said.

Lundquist said she finds many correlations between the visual arts and literature, and has written about ekphrastic poetry — poetry about particular paintings, photographs or sculptures.

“I find many opportunities to show my students artwork, particularly when teaching Modern and Contemporary American Poetry, as the poets and the painters often worked together and were working out similar aesthetic and representational issues.”

Mack’s talk, “When the Blues Come to Town: U2, Gary Clark Jr., and the Blues Apprenticeship,” is based on a chapter from her book project, Fade to Black: Blues Music and the Art of Narrative Self-Intention From Robert Johnson to Jack White. 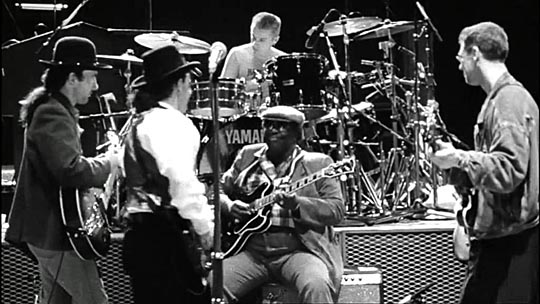 U2 and B.B. King collaborated on “When Love Comes to Town,” which was featured on the band’s 1988 disc and movie titled “Rattle and Hum.”

“My book explores racialized blues mythology and puts forth a new take — that these artists and others, far from having ready-made racial and cultural identities, instead have fashioned worlds through their own autobiographical and biographical storytelling,” she said.

This particular chapter focuses on the Irish rock band U2’s collaboration with the late African-American bluesman B.B. King, and African-American blues-rock performer Gary Clark Jr.’s apprenticeship with white mentors. Mack said she will discuss the role that blues authenticity plays in these dynamics and how they are affected by racial fluidity.

As an English assistant professor, Mack said she finds connections between music and literature, especially African-American literature because the genre comes out of an oral tradition that includes music. In the fall, she plans to teach a graduate seminar called The Autobiographical Impulse in the 20th-Century American Blues Literature, Drama and Music, in which students will have the opportunity to hear the music alluded to in literature.

“Musical references are abundant throughout African-American literature, so I think it is important for students to actually hear the music in class rather than simply reading about it,” she said.

Humanities Happy Hour was originated by the Humanities Institute in the College of Languages, Literature and Social Sciences. The institute serves as an advocate and support for the study of human cultures at UT.

“Much of the research we do in the humanities is interdisciplinary in subject and approach, and doesn’t fit into neat categories,” said Dr. Christina Fitzgerald, director of the institute and English professor. “The work of Drs. Lundquist and Mack exemplifies this boundary-crossing. Although they both teach and work in the English Department, their research engages with the intersections of literature and the arts.”

For more information, contact the Humanities Institute at 419.530.4407 or humanitiesInstitute@utoledo.edu.