New FieldTurf surface to be installed at Glass Bowl 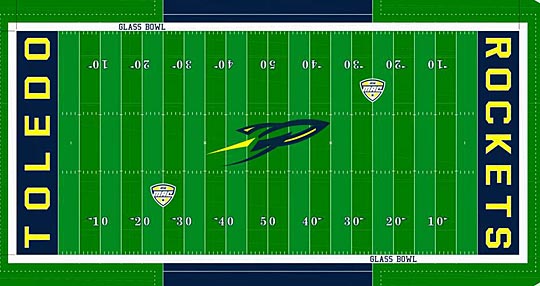 This rendering shows what the new FieldTurf surface may look like in the Glass Bowl.

The Rockets will make their debut on the new field in their home opener vs. Maine Saturday, Sept. 10.

“We are very pleased that we will have an outstanding new FieldTurf surface ready for the 2016 season,” O’Brien said. “Our new field will help the Glass Bowl maintain its reputation as one of the truly outstanding college football stadiums in the country.”

“Any time you can make improvements to your stadium, it’s good for the program,” said Head Football Coach Jason Candle. “Our players are excited about playing on a new FieldTurf surface next fall.”

The look of the new field will not change dramatically, according to Tim Warga, UT assistant athletic director for operations and events.

“We made a few tweaks, but overall we felt we wanted to stay with our current look,” Warga said. “The bench areas will be solid blue, and the numbers on the field will be outlined in blue, but otherwise from a fan’s perspective, it will look very similar to our current field.”

The Glass Bowl was built in 1936 and had a grass playing field until Astroturf was installed in 1974. The Rockets stuck with Astroturf until 2001 when a new surface called Nexturf made its debut. That surface was replaced by Field Turf in 2008.