Alessandra Norden knew something was wrong.

Her gums were inflamed and bruised, she was gaining weight and noticing a significant amount of blood in her stool. She felt lousy most days.

A primary care physician she was seeing at the time suggested it was hemorrhoids and maybe menopause. The symptoms, however, only grew worse. 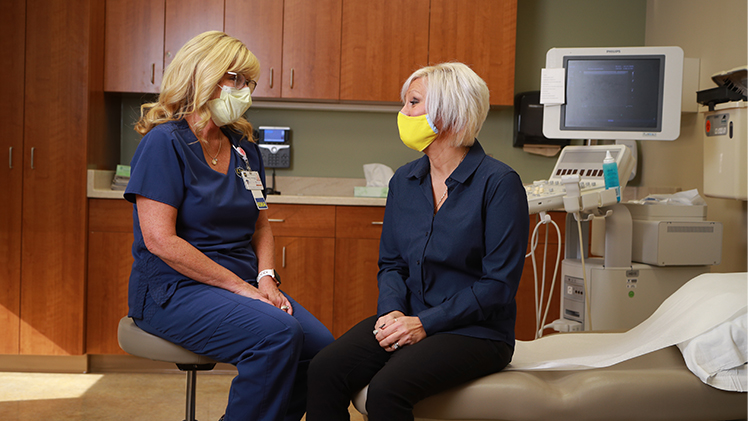 Following her successful battle against colon cancer, Alessandra Norden, right, said the care and compassion she received at UTMC made a significant difference in her recovery. “I don’t think I could have the faith in other hospitals like I have faith in UTMC because they have proven themselves over and over again. My entire family has faith in UTMC.”

“I was miserable,” Norden said. “I remember thinking, if menopause does this I don’t know if I can survive it. I just had this feeling something was seriously wrong.”

Eventually, she was referred for a colonoscopy at The University of Toledo Medical Center. The procedure confirmed her worst fears. A tumor the size of a baseball was found in her colon.

Norden was 46 at the time, decades younger than when most colorectal cancers are discovered and still four years out from when most physicians recommend people of average risk start regular screenings.

She wasn’t a stranger to health problems — Norden had open-heart surgery at 32 — but this was cancer. She was afraid. Her family was afraid.

Her case was referred to Dr. Prabir K. Chaudhuri, a surgical oncologist at UTMC. The situation was serious, he told her, but he could remove the cancer. She had a good chance to recover.

“I believe in the power of prayer and I knew people were praying, but when he said that he was so sincere,” Norden said. “I believed him. He didn’t look everywhere around the room — he looked me right in the eyes and said ‘you’re going to be all right.’ He was so confident in what he could do, and he did it. He was a hero for me.”

She was booked for surgery to remove the tumor on July 7, 2015, just days after her diagnosis was confirmed.

Chaudhuri said colon cancer is highly curable, particularly if caught early before it has metastasized. Fortunately, scans showed Norden’s cancer had not spread beyond the colon.

“She is the kind of patient who had a strong positive mental attitude throughout her treatment. That makes a difference,” Chaudhuri said. “UTMC has all the technology and new drugs and therapies like any other cancer center in the country. What sets us apart is that we have a strong personal relationship with the patients.”

Her full recovery, including seven months of chemotherapy, was slowed because of additional health problems, which necessitated a lengthy hospital stay.

All the while, Chaudhuri and Norden’s entire care team were with her.

“Dr. Chaudhuri, the nurses, the medical assistants, the residents — they all go above and beyond. I was bored but they would come and visit me at lunch or after their work schedule just to talk. They made me feel comfortable,” she said. “I don’t think I could have the faith in other hospitals like I have faith in UTMC because they have proven themselves over and over again. My entire family has faith in UTMC. They saw what these doctors can do for me.”

Norden continues to get regular bloodwork and imaging as a precaution, but she has remained cancer free. She credits the skill and compassion of Chaudhuri for her recovery.

Today, Norden advocates for the importance of regular preventative cancer screenings, including colonoscopies.

“I want to be an ambassador and talk about this. I don’t want people to be scared. Get it done. It doesn’t hurt,” she said. “Colon cancer is nothing you should take lightly. The good news is there’s so many people who have had colon cancer who are still alive today.”

Chaudhuri said those efforts are important to encourage others to get screened for early diagnosis of colon cancer and understand what to expect.

“She has given back her time and effort in making other people understand what it is like to go through cancer treatment and how having a positive attitude can make the outcome so much better.”