Harmonic vocals and mashups, jaw-dropping dance moves and themed costumes are a few of the things you can expect to see on stage at Songfest, which will take place Saturday, April 2, at 5 p.m. in Savage Arena.

Now in its 79th year, Songfest brings together campus organizations, students, alumni and the Toledo community to entertain the audience with song and dance and raise money for a chosen philanthropy. 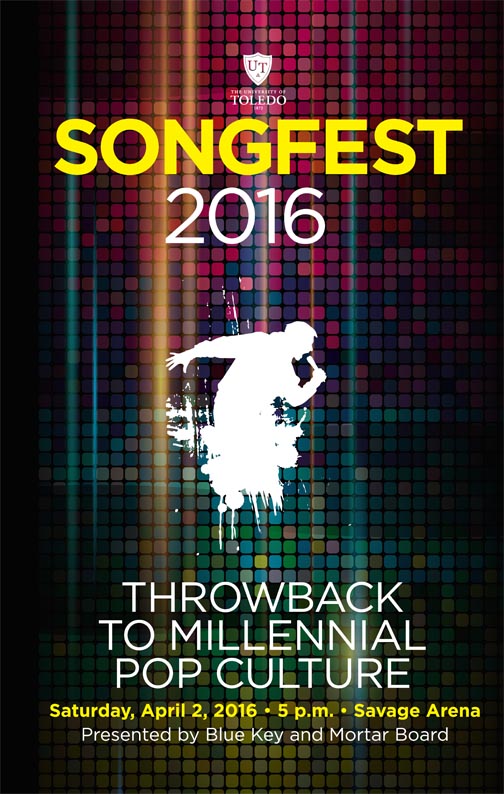 This year’s philanthropy is the Daughter Project, a local organization that builds foster homes for victims of human trafficking, usually girls between the ages of 10 and 17. These homes give victims a place to live and the resources for rehabilitation into a normal life.

“Human trafficking is a serious issue in the Toledo community and one that is not always talked about,” said Alex Wisniewski, a fourth-year biology major and one of the Songfest event coordinators. “These women that are freed from trafficking many times do not have a home waiting for them, and the Daughter Project is able to [fulfill] the most essential needs that many of us take for granted.”

Songfest is presented by Blue Key National Honor Society and Mortar Board National Senior Honor Society, both of which have put on various fundraisers this year to collect money for the Daughter Project. Songfest attendees also will be asked to donate to the philanthropy if they are able to do so.

Last year, $10,000 was raised for the Wounded Warrior Project. This year, the goal is to exceed that amount for the Daughter Project, according to Wisniewski.

The theme of this year’s Songfest is “Throwback to Millennial Pop Culture” and will feature popular songs from 1990 to 2010 that the current generation of students grew up singing.

A total of 21 fraternities, sororities and co-ed organizations will compete in this year’s event. Students began practicing months in advance to perfect their routines in the hopes of winning one of the coveted awards.

“The day of Songfest definitely makes all the months of hard work worth it,” said Katie McGough, Songfest director in the Alpha Chi Omega sorority. “There is no greater feeling than the adrenaline rush you get while on stage.”

Trophies will be given for first, second and third place in the men’s and women’s categories, and one first-place trophy will be given to the co-ed winner.

“Songfest is one of the most demanding, but absolutely rewarding endeavors I have taken on, and being able to help out a wonderful organization like the Daughter Project, which really makes a difference in lives, is a feeling I can’t even begin to describe,” Wisniewski said.