Junior Forward Scoring Points on the Court, Impacting Lives in the Classroom

JT Shumate’s focus and determination were evident at an early age. From holding his follow-through on his shot at 16 months old, to making sure his kindergarten classmates got in line quickly before recess, The University of Toledo’s junior forward has been singularly focused throughout his life.

“JT has always been very conscientious and diligent,” said his father, J.R. Shumate. “He wanted to do everything the best he could in whatever activity in which he was involved. That was just his personality and makeup.” 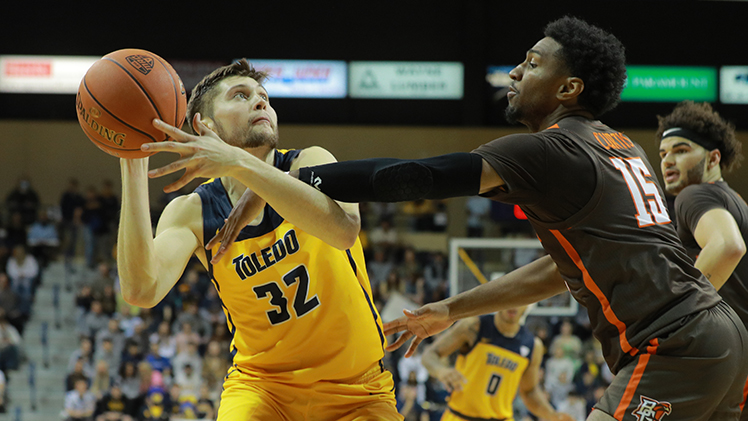 That mentality has played a key role in Shumate helping the Rockets win back-to-back Mid-American Conference titles the last two seasons. It also has led to the Newark native becoming the program’s first CoSIDA First-Team Academic All-American since Mitch Adamek in 1982 and only the second-ever.

“I think a big part of why I’ve done well is the effort I put in,” said Shumate, who has a 3.85 grade point average in middle childhood education.  “I don’t feel like I’m overly smart. You can ask almost anyone on the team, and they’ll say I am not always the sharpest dude. I feel like it’s just work ethic and putting in the hours necessary to make yourself successful, as it is with anything in life.”

Shumate said a big motivation for him to become a hard worker came from the examples his parents and grandparents provided.

“My mom (Kari) is a reading teacher in elementary school,” he said. “She read to us every day, and she was also doing many things around our house. My dad was a teacher and is now a vice-principal and worked very hard to get to where he’s at.

“My grandma and grandpa didn’t have college educations, but they are two of the smartest people I know in their own specific areas and expertise,” Shumate added. “They always were working. Seeing them work on something all the time definitely transferred into everything I did.”

Now, he is looking to set that type of example and provide motivation for youth as he follows in his parents’ footsteps. Shumate is working in a fifth-grade classroom at Marshall STEMM Academy, a K-8 school in downtown Toledo. He made that decision because he felt that was a period in his life when he needed some direction. 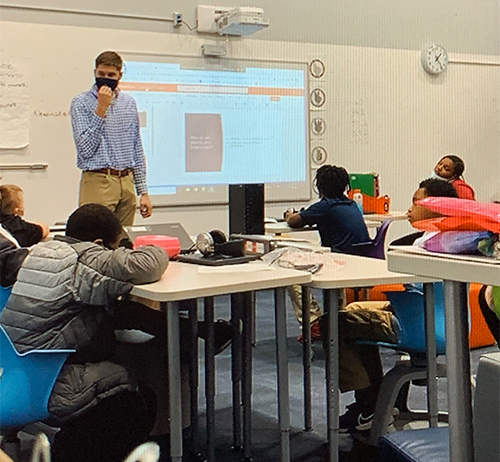 Shumate is focused on making an impact at Marshall STEMM Academy’s after-school program, helping motivate students to finish their homework before their parents pick them up.

“I chose to focus on middle school education because that was an odd time for me,” Shumate said. “It wasn’t my best time or my most fun years, and I feel like if I can make that stage of life better for kids that would be ideal.”

He said one area he thinks he is making an impact at the school is his work with the after-school program where he tries to motivate kids to get their homework done before their parents pick them up.

“When you get to talk to students individually or in a smaller group you can really get to know them,” Shumate said.  “I feel like I am making a good impact there helping them get started on their homework. A lot of times they didn’t want to do it, but then they realize they might not do it later and it would be good for them to get it done. It’s been fun being a part of that process.”

Shumate’s ability to focus on one thing, such as getting students to do their homework, is something his father said he saw in his son at a young age.

“JT’s attention to detail has always been really good,” said the elder Shumate, who played college basketball at Otterbein and Ohio Wesleyan. “When he started to work on something, he spent a lot of time trying to do the best he could whether it was in school or in basketball.”

It is that focus and hard work, along with his father’s assistance, which helped Shumate lead the MAC this past season with a 48.2 three-point field-goal percentage, on his way to earning second-team All-MAC honors. “JT has always loved doing drills to improve his skills,” his father said. “I remember him starting structured workouts when he was five or six years old, and his love for them has only grown as he’s gotten older.”

Shumate credits much of his success to his dad, who coached boys and girls high school basketball at the varsity level.

“It’s hard for me to express how much my dad has helped me,” said Shumate, whose sisters, Katie and Emma, both play collegiately at Kent State and Ohio State, respectively. “He was always giving me little tips and pointers. He played a huge part in where my sisters and I are right now. All the time he was out there rebounding for us. The knowledge that he has about the game and transferred to us was huge.”

And now Shumate can pay it forward to the students he is teaching now and in the future.