The University of Toledo has partnered with the Toledo Zoo, the U.S. Fish and Wildlife Service, and the Ohio Department of Natural Resources to re-establish ancient lake sturgeon in Lake Erie.

“They’re charismatic, gentle giants who look like sharks and have been around for more than 150 million years,” said Jessica Sherman, PhD student researcher in UT’s Department of Environmental Sciences. “People are sometimes scared because lake sturgeon are enormous, but they don’t have teeth.” 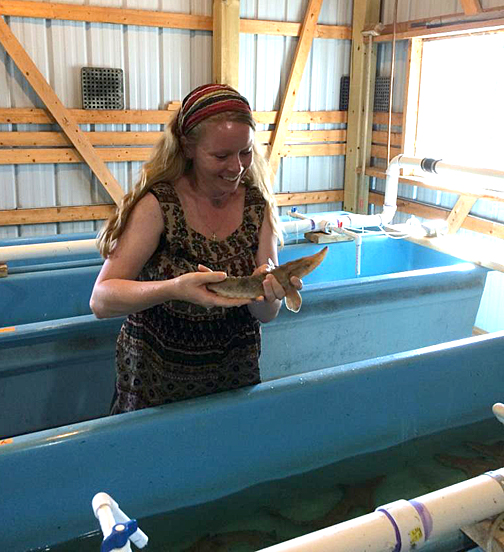 UT PhD student Jessica Sherman held a lake sturgeon at the Black Lake Fish Hatchery, located near Onaway, Mich., in this photo courtesy of the Michigan Department of Natural Resources.

“Their mouths are almost little vacuum tubes underneath the snout,” Dr. Christine Mayer, UT ecology professor, said of the fish that can grow up to 300 pounds and nine feet long. “They siphon things off of the bottom [of the lake], such as insect larvae, worms and snails.”

Mayer and Sherman are part of the UT team helping the effort to get $90,000 in federal grant money for a sturgeon rearing facility at the Toledo Zoo.

“The plan would be to hatch sturgeon eggs and raise them to juvenile stage in a trailer-sized, streamside fish hatchery. The goal is to release 3,000 of these juvenile fish into the Maumee River every year,” Mayer said. “The zoo owns property right against the river. We would be running Maumee River water through the facility because sturgeon do what is called imprinting. When they decide at the age of 15 or 20 years old that it’s time to make babies, they go back to where they were born.”

Sherman is working to determine how much spawning and nursery habitat still exists for the fish in the Maumee River, which flows into the Great Lake. 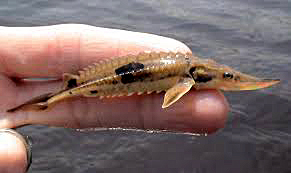 A juvenile lake sturgeon is shown in this photo courtesy of the Michigan Department of Natural Resources.

“We don’t want to spend a lot of time and money to build this rearing facility and put the sturgeon in the river if we don’t know the river is going to be able to support them,” Sherman said. “Historically, they were in the Maumee, but a lot has changed in the past 100 years. The implementation of a shipping channel and a couple of dams, as well as development in the river floodplain, have influenced the Maumee River since sturgeon have been extirpated. This is an endangered and threatened fish, so we don’t want to misuse our resource by putting them in an area they can’t survive.”

Juvenile sturgeon need soft, sandy areas. Adults need harder terrain for spawning so eggs can settle between rocks and be protected from predators and fast currents. 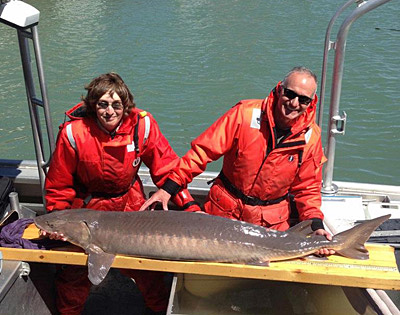 Eric Stadig, left, and Jim Boase posed with an adult lake sturgeon in this photo courtesy of the U.S. Fish and Wildlife Service.

“It may not seem like a lot, but there are areas where sturgeon are doing well in northern Michigan. Between 1 and 10 percent of those habitats are spawning habitat,” Sherman said. “25 percent is more than enough to successfully spawn.”

Lake sturgeon are only spawning in two Lake Erie tributaries: the Detroit River and the Niagara River.

“In the 1800s before commercial fishing started, it’s estimated there were over a million sturgeon in Lake Erie alone,” Sherman said. “Sturgeon have been rehabilitated in other parts of the Great Lakes, but it hasn’t been focused on in Lake Erie. We are trying to find a balance in our waterways that has been gone for a long time.”

If funding comes through in the fall, groundbreaking on the streamside rearing facility at the zoo also could begin in the fall. The eggs could start growing in spring 2017. The first 3,000 lake sturgeon would be released in fall 2017.

However, it would be another 15 to 20 years before they came back to the Maumee River to spawn.

“This is a long-term project,” Mayer said.

“The coolest part of this is the impacts are for generations to come,” Sherman said.