Less than one month after the Brussels attacks, there are many questions surrounding the terrorist group ISIS.

“Is ISIS Islamic?” will be the topic of the annual Imam Khattab Lecture on Islamic Thought by Dr. Ovamir Anjum, UT Imam Khattab Endowed Chair of Islamic Studies. The free, public lecture will be Thursday, April 7, at 7 p.m. in the Driscoll Alumni Auditorium. 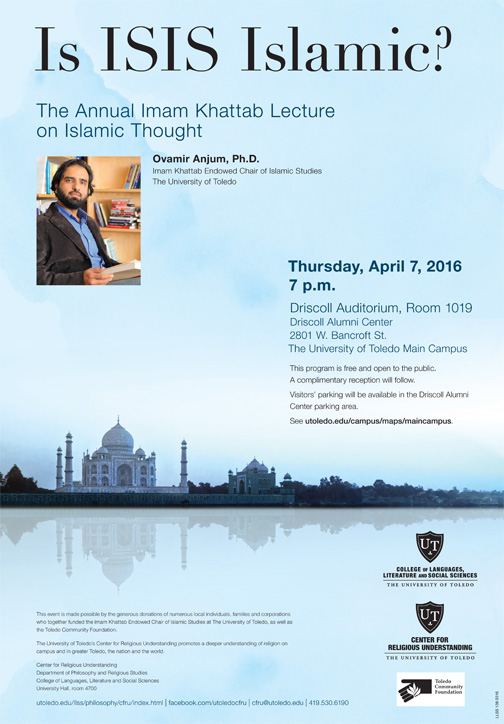 “In the face of these terrible terrorist attacks in Brussels, France, Turkey and Pakistan, there is a lot of emotion and fear,” he said. “To understand the situation better, I think it’s good for us all, especially with the ongoing elections, to have these discussions.”

Anjum spoke on the topic last fall for the series, “Windows on Contemporary Islamic Issues,” following the Paris attacks, stating that ISIS is not Islamic, but rather Saddam Hussein’s radical legacy. Modern scholars consider ISIS a modern-day Kharijites — a heretical group known for violence, he said.

Expanding on his previous talk, Anjum said he plans to reflect on three points: what conditions created ISIS; how everyone in the Islamic tradition condemns the acts of ISIS; and the disturbing phenomenon of young people, especially Westerners, joining ISIS.

With a larger audience, Anjum said he hopes to spark conversations in the community.

This lecture is part of the UT Center for Religious Understanding’s annual lecture series, which has been active for more than a decade. The center promotes a deeper understanding of religion on campus and in greater Toledo.