Drummond was one of seven former NCAA student-athletes featured as “Off Court Champs” during the campaign. Later this month, Drummond will provide current student-athletes with career guidance during virtual workshops.

“Being a part of this initiative is important for me because I want to be able to connect to young basketball players and let them know that there is more to life than basketball,” Drummond said. “I realized that basketball wasn’t always going to be there for me when I was in college. It was then that I made the decision I didn’t want basketball to define who I am, and that has led me to where I am today.” 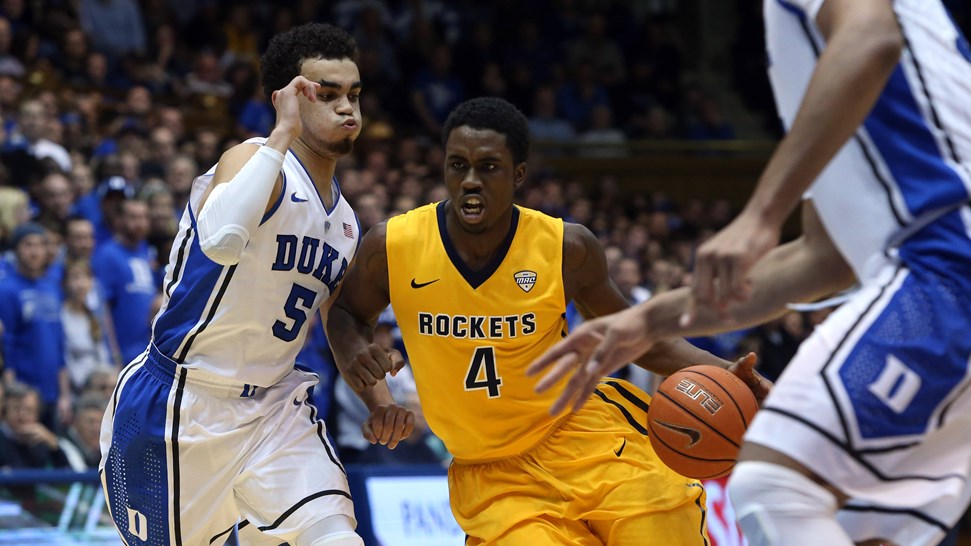 Since graduating in 2015 with a degree in criminal justice, Justin Drummond has become a successful businessman. He founded SparkC when he was at UToledo and has since added two more businesses to his portfolio.

Since graduating with his degree in criminal justice in 2015, Drummond has become a successful businessman. He founded SparkC when he was at UToledo and has since added two more businesses to his portfolio as CEO of Execz Suit Company and Dreamers Inspiration, LLC.

A big key to Drummond’s successful entry into the business world was the decision he made following his final season in a Rocket uniform.

“I had numerous opportunities to play overseas but decided to attend graduate school at the University of Maryland,” said Drummond, who averaged 13.7 ppg and 4.9 rpg at Toledo and earned third-team All-MAC honors as a junior and senior. “My goal was to get a master’s degree in cyber security management and policy with the goal of transforming SparkC into a cyber security company.”

The Bowie, Maryland, native chose that path because he knew his basketball career had a shelf life. He understood that the time he spent playing basketball and not furthering his education would have a negative impact on his earnings potential.

“I knew that the value for my future career growth would drop every month if I chose to play professionally,” Drummond said. “I needed to invest my time into education as well as a career that I was going to have the rest of my life.”

Head Coach Tod Kowalczyk added, “Justin had the big picture of what life after college basketball was going to look like more so than any other player I’ve been around. He was not a good leader for us but a great leader for us, and it’s great to see that he’s carried that over into the business world.”

During a three-year development period, Drummond transitioned SparkC from a private security business into a cybersecurity and training company. The company now has seven employees: six full time, one part time.

“It was a long process of designing our training technology’s actual software and then learning how to stream it and get it on mobile devices,” Drummond said. “There was a lot of trial and error, watching YouTube videos and reading books along the way. We have developed a proprietary formula and now it is paying so many dividends after my employees made so many sacrifices.”

Drummond has positioned SparkC to work with federal, state and local governments as well as private companies. His company has worked directly with the U.S. Department of Veterans Affairs’ Office of Acquisition and Logistics in developing live-actor interactive training programs to provide acquisition-focused learning methods. In addition, SparkC has created programs for the U.S. Federal Health & Human Service and Prince George’s County Health Department as well as numerous other entities.

“When I left Toledo, I thought cyber security would be at the forefront of what I would be doing but I wasn’t really sure where it would go,” Drummond said. “The key for me was having confidence in myself and taking what I learned and having that develop into the training technology portion of my company. It has really taken off since the start of the pandemic with companies, local governments, municipalities needing high-quality virtual training tools to receive the desired outcomes they are looking for.”

Now that he is nearly a decade removed from his playing days, Drummond said he is thankful for the education he received as a result of his basketball scholarship.

“All the knowledge I learned while I was in Toledo and being exposed to people in the business community have all played a big role in the success of my companies,” Drummond said. “I met individuals who possessed great business acumen and they provided me a lot of advice about how to be a professional and be successful in life.”