O’Brien will be on the committee through the 2022 NCAA Tournament after joining it in August 2018. 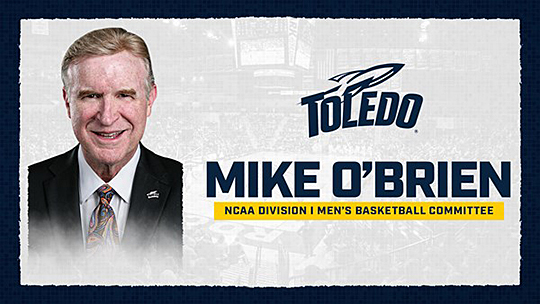 “It has been such an honor to serve on this committee, and I look forward to being part of the NCAA Championship for the next two years,” O’Brien said. “I cannot be more positive about the leadership I have seen from NCAA Senior Vice President for Basketball Dan Gavitt, the NCAA staff and my fellow committee members. They are all so committed to making March Madness the best event possible.”

O’Brien is in his 19th year as the athletic director at UToledo. During his tenure, he has helped shape the Toledo athletics program into one of the best in the Mid-American Conference. His tenure has seen unprecedented athletic and academic achievements of UToledo’s student-athletes, as well as numerous ambitious capital projects that have elevated Toledo’s status as one of the top mid-major athletic programs in the country. In 2019, he was tabbed to be a co-director of The University of Toledo’s upcoming Ready to Launch capital campaign.

In the classroom, the Rockets have produced overall department grade point averages above a 3.2 in each of the past 10 semesters, and above a 3.1 in the past 22 consecutive semesters. Rocket student-athletes had a combined GPA of 3.304 in the 2019 fall semester, the second straight semester with a 3.3 GPA or higher. UToledo’s women’s athletes won the MAC’s Faculty Athletic Representatives Award for the highest combined GPA in 2017-18. Toledo has won the Mid-American Conference Institutional Academic Achievement Award, presented annually to the school with the highest grade point average, in six of the last eight years. In 2011-12, the Rockets won the Cartwright Award, given annually to the MAC athletic program with the highest degree of excellence in academics, athletics and citizenship.

O’Brien received recognition for his accomplishments from the National Association of College Directors of Athletics at its convention in 2012 when he was named the Football Bowl Subdivision Northeast Region Athletic Director of the Year. O’Brien, who has the second-longest tenure among MAC athletic directors, served from 2015 to 2018 on the NCAA Division I Council, where he worked on the Competition Oversight Committee. He also chairs the MAC Football Coaches Committee and was the conference’s athletic director representative to the College Football Playoff Committee (formerly the Bowl Championship Series). He also has served as the chair of the Mid-American Conference Athletic Director’s Committee and was a member of the NCAA Division I Football Issues Committee.