One year shy of finishing his surgical residency at The University of Toledo Medical Center, Dr. Cyrus Chan is facing death with courage at his home in hospice care.

“I feel the end is approaching,” said Chan, a California native who is battling stage IV colon cancer. “I keep a positive attitude, but I know the outcome. My mom likes to feel there is a glimmer of hope. I am more realistic.” 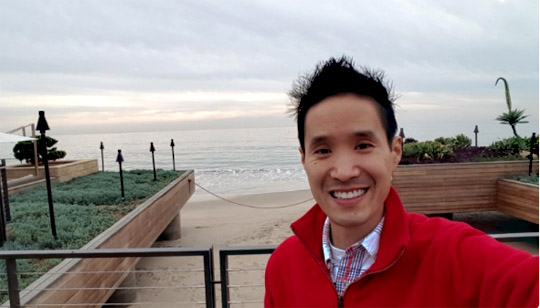 “We are hoping there is a miracle out there,” said his mother, Maria Chan, in the living room of the doctor’s suburban Holland home, where a hospital bed has been placed next to the couch.

“I am trying to live each day as it comes and make the best of it,” Chan said. “The table has completely turned. I have absolutely no control. I am beginning to feel the grip that cancer has on me. It is something I have accepted.”

Chan’s transformation from life-saving doctor to terminal patient has touched his fellow surgeons with the unpredictability of life.

“He is a brilliant surgeon who has helped heal so many patients, and he is extremely kind to medical students,” said Dr. Tahir Jamil, chief surgical resident at UTMC. “Seeing such a close friend and such a good human being have such a terrible condition has hit home for all of us. We’re devastated.”

Chan began his general surgery residency at UT in 2009. 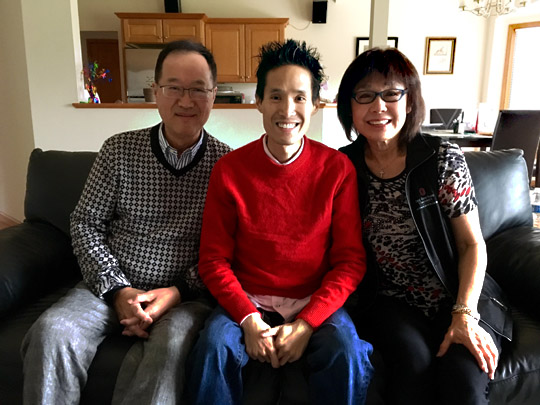 Dr. Cyrus Chan, center, at his home with his parents, Maria Chan, right, who lives in San Francisco, and Channy Chan, who lives in China.

A year and a half ago, Chan felt a pain on his left side. He thought maybe he pulled a muscle while skiing. However, when the pain persisted along with sudden weight loss and blood in his stool, he knew something was wrong. A colonoscopy uncovered malignant tumors. He was diagnosed with colon cancer at the age of 37.

Surgery to remove the cancer further revealed it had spread to the liver. Intensive chemotherapy and radiation did not keep it at bay for long. On Feb. 25, 2016, surgeons found hundreds of tumors all over Chan’s abdominal wall and small bowel. He said the largest was three centimeters and encased his small bowel.

“I have been honored and privileged to work with Cyrus,” Dr. Thomas Schwann, UTMC interim chair and professor of surgery, said. “Cyrus is not a ‘Hollywood’ sort of a surgeon. He is not loud and boisterous. He is quietly effective.”

Jamil and fellow resident Dr. Steve Stanek came up with a way to ensure Chan’s legacy lives on.

While Chan is still alive, his friends and colleagues have created an endowed scholarship for medical students and an endowed award for residents that will be presented annually through The University of Toledo Foundation in Chan’s name. The money will be given to people with the same gifts as Chan.

“He is not only a compassionate doctor with his patients. Cyrus has won several awards for teaching,” Jamil said. “The money will be for students and residents committed to surgery and to taking the time to educate others about College of Medicine.”

As of April 8, 237 people donated a total of $28,871 to the GoFundMe account for the Cyrus Chan Legacy Scholarship. The UT Foundation also has collected $38,495 from 35 private donors all over the world, including Trinity College in Ireland, where Cyrus attended medical school.

“I have rarely seen a groundswell of support like this,” said Howard Newman, associate vice president for development on Health Science Campus with The University of Toledo Foundation. “This is a tragic situation, and people have found a way to light a candle in the darkness. They’re going to make a difference to the future of residents and medical students at our College of Medicine.”

“He has touched the lives of so many people. It’s amazing that so many people are giving back,” Jamil said. “The smile on his face is priceless.”

UT also plans to give Chan an honorary degree.

“If he had not become sick, he would’ve graduated in June,” Mary Burda, UT residency education coordinator, said. “Our hearts are broken.”

“I feel honored,” Chan said. “I cannot put into words how much I love them and all they have done for me. It makes me feel special to know that everything I have done for the University and contributed to the residency program has left a mark.”

As he struggles with daily aches and pain, Chan finds the strength to remain optimistic.

Chinese characters cross the top of the twin-sized comforter on the hospital bed in his living room. They mean “luck, love, fortune.”

He hopes others learn from his difficult journey.

“Be happy with what you have and enjoy life as much as you can,” Chan said. “Don’t take anything for granted. Love your friends and family. Tell them you love them now and often.”