There was never much doubt that Obi Anunike would be a college student-athlete.

The son of Nigerian immigrants, Anunike has three older siblings who all played college sports. His brother Kenny played in the NFL, while his sisters Adaora (track at Miami) and Ganiru (volleyball at Case Western) were standouts in their own right. So it was no surprise when the 6-foot-4-inch, 240-pound defensive lineman out of Olentangy High School near Columbus was offered a scholarship to play football at The University of Toledo.

Anunike’s college career took a different path than his siblings, however. Beginning his sophomore year in high school through his sophomore year with the Rockets, he had six football-related surgeries. After the last one, following a knee injury at practice in 2018, he was told by the team medical staff that his football career was over.

“The hard part was it came just at the time I was going to get my first chance to play in a game,” Anunike said. “It was the week after we beat Nevada. Coach [Brian] George (defensive coordinator) told me that I would be playing in the next game. That’s when I tore my ACL in practice, a day before the next game.

“I underwent five surgeries before I tore my ACL, but this one was the toughest, mentally and physically. The rehab took 11 months. I came to realize that my body could no longer take the stress of playing football.”

Surprisingly, very little changed for Anunike after he became medically disqualified to play football. He continued to go to all the team meetings, all the practices and all the games — home and away — as a student assistant. He took on the role of signaling the defense in both practices and games. 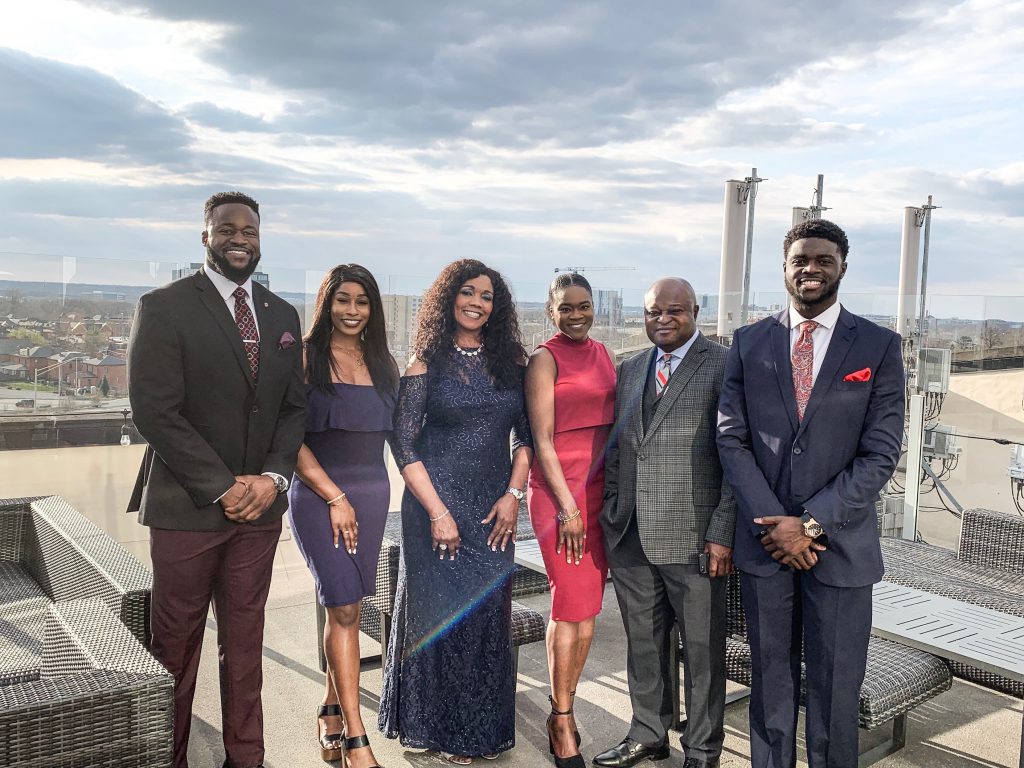 Rocket football defensive end Obi Anunike, far right, posed for a photo with his family, from left, Kenny, brother; Adaora, sister; Oby, mother; Ganiru, sister; and Emmanuel, his father. Anunike is graduating from the College of Business and Innovation.

“Obi never let his circumstances dictate the outcome of his life,” Toledo Head Coach Jason Candle said. “When something is taken from you, your character is defined by how you respond. His football career was taken from him, but he did everything he could to stay involved with the team. He came to practice, he volunteered for community service, his grades were outstanding. He did as much for this team off the field as anybody in our program.”

One thing that stayed constant for Anunike after his playing days were over was his emphasis on academics. Assuming he receives all A’s this spring term, he will graduate May 9 from the College of Business and Innovation with bachelor’s degrees in finance and management with a perfect 4.0 cumulative GPA. Growing up, it was understood that grades always came first.

“I give a lot of credit to my parents,” said Anunike, who in addition to exceling in the classroom also served as the football team’s representative on the Student Athlete Advisory Committee. “They knew that education was the only way out for them, so they emphasized that for us. My father earned his Ph.D., and my mother also earned her bachelor’s degree. They wanted to raise a family in this country, and education made that possible.”

His plans for a family reunion at this spring’s graduation ceremony at the Glass Bowl were wiped out, like so many other things, by the COVID-19 pandemic. But he is philosophical about it.

“My family was going to come in for my graduation from New York, Cincinnati, Cleveland, all over,” he said. “Sure it’s disappointing, but people are sick and dying. That really shifts your perspective.”

After graduation, Anunike plans to pursue a career in finance. No matter what his future holds, there is no doubt that he made an impact on the Toledo football program without ever having played a single down.

“Obi is a perfect example of a true student-athlete,” Candle said. “He’s the picture of how sports can help shape you as a person no matter what you did on the field.”