Frederic D. “Fritz” Wolfe, who built an empire in the long-term healthcare field and shared his wealth in the community, died April 5 at Kingston Rehabilitation of Perrysburg. He was 90.

He joined the family business, the Lima Lumber Co., after attending Yale University and the Harvard Business School. His education was punctuated by a two-year stint as an officer in the U.S. Air Force. 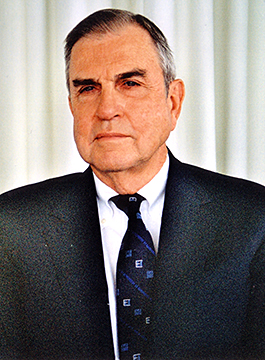 In 1963, Lima Lumber built its first nursing home. Four years later, Wolfe, at the helm of the family business, ventured into the skilled nursing industry and started two companies — one to manage nursing homes and one to invest in the construction and acquisition of nursing homes.

Wolfe co-founded the Health Care Fund in 1970. It was the first real estate investment trust in the nation to focus solely on nursing homes and clinics. By 1980, the company counted more than $25 million in assets. That company became Welltower, which was valued at more than $25 billion by the late 2010s.

In addition, Wolfe founded Health Care and Retirement Corp. of America in 1981. The nursing home operator was sold for $99 million in 1984.

The generous business mogul shared his wealth with several institutions, including The University of Toledo. In 1997, Wolfe Hall opened on Main Campus. The Wolfe family gave $1.5 million for the state-of-the-art research laboratories for the departments of Biological Sciences and Chemistry, and, at the time, the College of Pharmacy.

After UToledo merged with the Medical University of Ohio, the Wolfes donated $2.5 million to support diabetes research through the Center for Diabetes and Endocrine Research, a collaboration between the College of Medicine and Life Sciences and the College of Pharmacy and Pharmaceutical Sciences. To honor that gift, the new home for the College of Pharmacy on Health Science Campus was named the Frederic and Mary Wolfe Center. It opened in 2011.

Wolfe was a trustee emeritus of The University of Toledo Foundation Board, on which he served from 1992 to 2003.

The philanthropist was honored by the College of Pharmacy and Pharmaceutical Sciences in 2009 when he received an honorary doctor of humane letters.