Lauren Wegener was five years old when she joined her first club swim team. It wasn’t long before she realized that competitive swimming could pave a path to her future.

Wegener, a junior on the University of Toledo swimming and diving team, is set to graduate a year early this May with her bachelor’s degree in mathematics. A native of Rochester Hills, Mich., she grew up down the street from one of the local pools and would spend her summer days there, joining the club’s swim team before she even began school.

When she was 10 years old, Wegener experienced her first taste of modest success when she placed in the top 10 at state championships for the first time. She started taking swimming more seriously and her dedication paid off.

“By the time I was 12 I wasn’t eighth on the podium, I was more like second on the podium,” Wegener said. “That’s when I decided I’d be swimming for the foreseeable future.”

Wegener developed to the point that she was good enough to compete as a collegiate swimmer. When it came time to look at colleges, Wegener initially looked at other schools before considering The University of Toledo. It wasn’t until her father had a conversation with a Rocket assistant coach at a swim meet that they were convinced to drive down to check out the campus.

“I had driven past Toledo a million times growing up,” Wegener said, “driving to swim meets or on our way to vacation, but to be honest, I hadn’t really thought about it before. But when we got to campus for an unofficial visit, I was amazed by how pretty it is.”

UToledo only grew in Wegener’s estimation after she had a chance to meet the coaching staff and the people who would end up being her future teammates.

“Between the campus, coaching staff and the academics, I had a pretty strong feeling that Toledo would be a good fit for me,” she said. “But once I met the other girls, I knew this was going to be the place for me.” 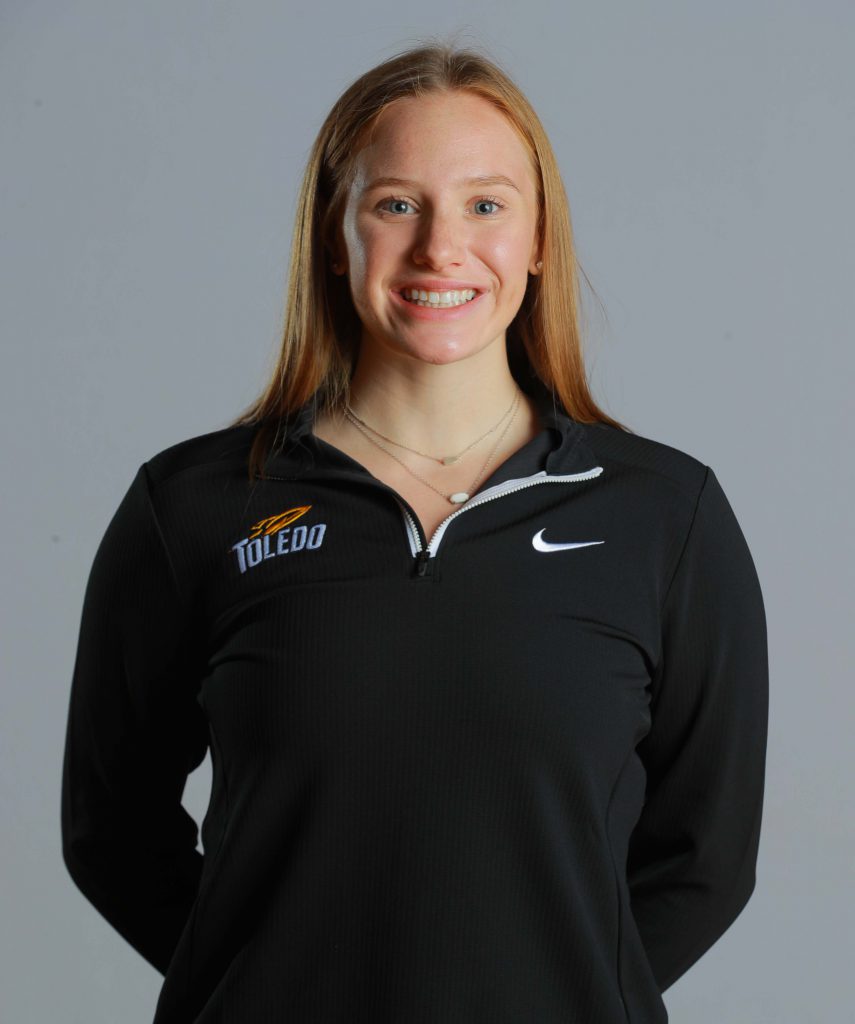 After her first semester, Wegener came to a realization: She didn’t like chemistry.

“I went back and thought about why I loved chemistry when I was in high school, and it was because of all the math that was associated with it,” Wegener said. “So, I thought, maybe I should look into math.”

It’s safe to say that was the right decision for Wegener. She carries a 3.95 cumulative grade point average as a mathematics major with a focus in actuarial sciences, and she will receive her bachelor’s degree this May after only three years. To graduate early with a STEM degree as a student-athlete takes a good deal of focus, willpower and drive — attributes that Wegener is clearly not lacking.

“High school really prepared me for a kind of regimented schedule,” Wegener said. “In high school you wake up and go to practice in the morning, go to school, do homework, go to practice again, come home and eat dinner, and you repeat it all again the next day. I’m so used to having a routine and structure that I don’t really think about it that much.”

“Lauren has been a great academic role model for the team, especially for each new incoming class,” Rocket head coach Brie Globig said. “She helps our program maintain its strong academic reputation with her constant commitment out of the pool.”

Wegener’s opportunity to graduate early is due in some part to the work she did in high school. She came to Toledo with several Advanced Placement (AP) credits, which put her several steps closer to a bachelor’s degree before she even took her first college class.

“I remember looking at my academic audit during my first semester freshman year thinking I might graduate in three-and-a-half years,” she said. “Then, once I officially declared my major, I realized I could graduate in three years.”

All it took for Wegener to accelerate her graduation date was one extra class per semester. At a school like UToledo, where rigorous academic pursuits are not uncommon among student-athletes, Wegener has had the necessary support to receive her degree early and get a head-start on her professional career.

Wegener already has a job lined up after graduation at Plante Moran in Michigan, where she will be working in employee benefits consulting. Her goal is to become a consulting actuary.

“One thing that absolutely attracted me to Toledo was how many athletes are in STEM majors,” Wegener said. “There were coaches at other schools that weren’t as receptive towards me majoring in engineering. But our coaches and our athletic department encourage us to pursue difficult majors and to do what we want to do. I think that’s very special and unique.

“Between the support system here and the classes I took, I think everything aligned perfectly to put me in the position I’m in now,” Wegener added. “I can’t picture being anywhere else.”