Water hundreds of feet below the surface of Lake Michigan is warming, especially in winter, according to a new study published in Nature Communications.

An environmental and ecological statistics expert at The University of Toledo played a critical role in research led by the National Oceanic and Atmospheric Administration (NOAA) that used a 30-year data set to investigate how climate change is impacting the deepest parts of the Great Lake. 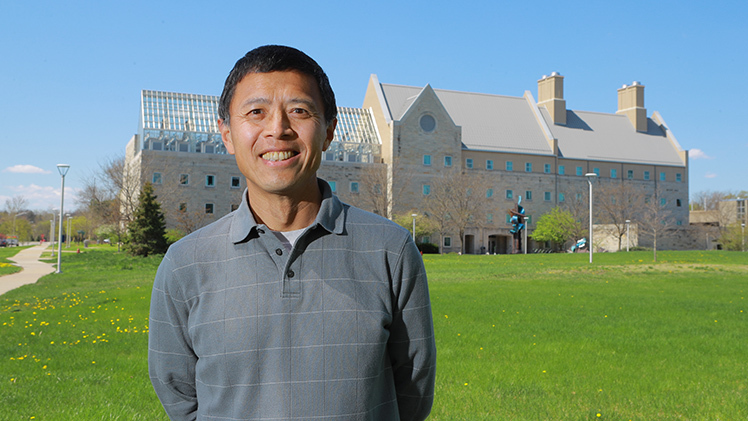 Dr. Song Qian, associate professor in the UToledo Department of Environmental Sciences, used a 30-year data set to investigate how climate change is impacting the deepest parts of Lake Michigan.

Dr. Song Qian, associate professor in the UToledo Department of Environmental Sciences, wrote the computer code that allowed the team to separate the long-term temperature trend from seasonal fluctuations.

“I was not expecting an obvious increase in temperature at the bottom of Lake Michigan,” Qian said. “Lake Michigan is a large lake. It takes a lot of energy to heat up that large amount of water. But our study shows what’s happening on the lake’s surface during the summer is actually impacting the lake’s deep waters during the winter.”

Qian, who conducted data analysis on the deep-water temperature measurements during the summer of 2019, credits the foresight of installing deep water sensors more than 30 years ago as the most important factor in the project.

The long string of high-tech thermometers floats vertically in the water and records temperatures at different depths in the lake. The deepest sensor is 460 feet deep. The sensors have been recording water temperatures every hour almost continuously for the past three decades.

“We found that this long-term data set not only confirms that Lake Michigan’s deep waters are warming, but also shows that winter is vanishing from them,” said Eric Anderson, a physical scientist at NOAA’s Great Lakes Environmental Research Laboratory and the study’s lead author. “Without high-frequency long-term monitoring of subsurface waters of the world’s deep lakes, we will be blind to the impacts of climate change on most of Earth’s fresh surface water.”

As the largest surface freshwater system in the world, the Great Lakes have an enormous impact on the more than 34 million people who live within their collective basin and rely on the lakes for drinking water, fisheries and more.

“We don’t have similar long-term sensors in other Great Lakes, but the warming mechanism applies to all five Great Lakes,” Qian said. “Depending on their volumes and depths, I expect various degrees of warming trends can be found in all five lakes.”

This discovery may serve as a signal of changes to come in the near future that could have negative impacts on fisheries and recreation. Increases in a lake’s overall water temperature can lead to permanent changes in the water’s seasonal mixing patterns, which would disrupt the structure of its entire food web.

Relationships from the data show a shortened winter season results in higher subsurface temperatures and earlier onset of summer stratification.

“Water columns in large and deep lakes like Lake Michigan typically mix surface-to-bottom, or turn over, twice a year following seasonal changes — once in the fall and again in the spring,” Qian said.

The mixing process recycles dissolved oxygen and nutrients throughout the lake.

“The warming trend may result in the lake only turning over once a year,” Qian said. “When that happens, we can expect a different ecosystem.”