Linebacker Finds His Path as Student Through Mom, Sports

When Jamal Hines steps onto the stage at The University of Toledo’s commencement ceremony on May 7, somewhere out in the Savage Arena crowd it’s very likely that tears will be shed.

Hines, a star outside linebacker for the UToledo football team, will be the first one in his family to earn a college degree. Many in his extended family will be in the audience that day, including his mother, Tamika Dickey. A single mother, Dickey raised Hines and his three siblings in Cincinnati. She plans to come well-supplied with tissues.

“I’ll probably be a crying mess,” predicted Dickey. “When my kids graduated (from high school) I was a crying mess. I’m just so happy and blessed. God chose them for me.”

Dickey’s emotions are understandable given the challenges faced by young people who grow up in the inner city, as hers did. One of Hines’s uncles was shot and killed in the neighborhood when Hines was 9 years old. Some of the kids Hines grew up with are now caught up in the dead-end cycle of crime and substance abuse. Dickey was determined that her children would not fall into that trap.

“Without my mom, I don’t know where I would be,” said Hines, who will be receiving his degree in criminal justice. “She always kept us in sports. Year-round, we were always in some type of sport. I’m so glad she kept us in sports because it kept us off the streets and away from negative things that would get us in trouble. Her being that light and guiding us the right way, that helped me stay on the right path and get to where I am today.”

Added Dickey: “I just tried to make sure they stayed busy. A lot of kids in our neighborhood didn’t have enough support. Maybe their mothers didn’t have them playing sports or doing whatever to keep them busy. But I stuck with it with my kids. I told them ‘I don’t want you growing up in the streets and getting in trouble.’ Once one sport was over, we went right to the next one.”

Though all of Hines’s siblings played sports, his size and skill made him stand out. He played baseball and basketball until he reached high school, at which point he focused solely on football. He was a star lineman at Princeton High School in Cincinnati, good enough to earn a scholarship at UToledo.

He made an immediate impact for the Rockets, starting 10 games as a true freshman and tying for third on the team with 9.0 tackles for loss. He has made All-MAC as an outside linebacker in each of the last three years since then, earning first-team all-conference honors last season. 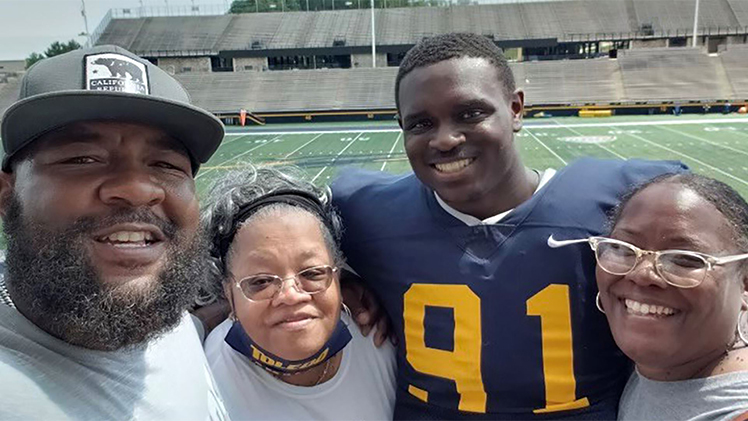 Jamal Hines poses with, from left, his uncle, his grandmother and his mother. The star outside linebacker and criminal justice student is the first one in his family to earn a college degree.

Hines’s stellar play has made him a critical component to the Rocket defense, but his overall character is what most impresses the Toledo coaching staff.

“Jamal is a very serious-minded guy who takes his academics seriously and takes his approach to football seriously,” Head Coach Jason Candle said. “He’s a stand-up human being and a person of great character. That’s a product of great parenting by his mom and the village of people around him that have helped him get to this point in time.”

Though Hines has indeed come a long way on his life’s journey, he still has many goals ahead of him. He is eligible for another season of football with the Rockets, which will also give him extra time to further his education, perhaps pursuing a second degree in some form of counseling. He aims to play professional football after his playing days in the Midnight Blue & Gold are over. After that, he wants to begin a career that will allow him to help others.

“I chose criminal justice as my major because when I was growing up, a lot of my peers did not have a stable household,” Hines said. “They didn’t have the structure that I had with my mom, who was a single mother. They needed someone to be their light, to actually push them to do better things, to graduate from high school. From middle school on up to high school, a lot of kids in my neighborhood started getting in trouble, going to jail, getting into drugs and stuff like that.

“With my degree I plan on working to help guide young people down the right path. A lot of them are choosing the wrong path and making mistakes that they cannot come back from.”

Hines’ own path has been marked by many milestones in his young life, but so far none as significant as the one that will occur on May 7. And his cheering section from Cincinnati — one that will include siblings, aunts, uncles, grandparents and cousins — will make sure he knows it.

“Jamal has worked very hard for it,” his mother said of her son’s graduation. “He’s so humble, he acts like it’s just another thing he’s doing, like it’s not a big deal. But I told him it’s a very big deal to us. I’m just so proud of him.”